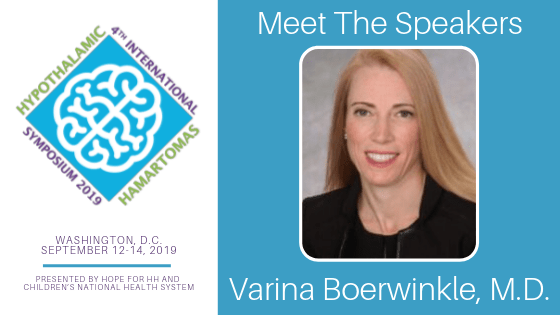 Varina Boerwinkle, MD is the medical director of the Neuro-Critical Care. Prior to joining Phoenix Children’s, Dr. Boerwinkle was the assistant professor of Pediatric Neurology at Baylor College of Medicine and a for Texas Children’s Hospital.

Dr. Boerwinkle is board certified in neurology with special qualifications in child neurology. She is a world leader in resting state-functional MRI for children, a tool she brings to Barrow at Phoenix Children’s for epilepsy surgery planning.

Dr. Boerwinkle is a member of numerous professional societies, including the American Academy of Pediatrics and Child Neurology Society.

Dr. Boerwinkle will be presenting an update on her research. She developed functional MRI (rs-fMRI) into a tool called Searchlight.  Searchlight shows inside a hypothalamic hamartoma (HH) seizures are coming from.  This precise targeting of the seizure generator, increasing seizure freedom by 45%.  She has also shown the pathway of abnormal connectivity from the HH through the rest of the brain.  This may allow a window into understanding, and potentially treating, the cognitive and psychological changes experienced in HH.

I am a pediatric neurologist and a specialist in resting state functional MRI (RS) in pediatric epilepsy.

As I am the director of the functional MRI Lab and study every patient evaluated for intractable epilepsy, I have acquired the largest functional MRI (RS) data set in HH.  This has led to the advancement in understanding the RS has the capacity to detect the location within the HH of where seizures start.  Knowing where the seizures start allowed surgeons to destroy the smallest area possible (less than a centimeter, often) to reduce seizures and often cure in HH.  It also led to understanding what is the seizure network in HH.

The meeting of the world’s experts on HH caregivers and families allows for the most open exchange of ideas and problems directly from those who are on the front lines to the scientists with the brightest ideas and to tackle these issues.  It leads to advancements in understanding the most up to date thinking in this area, allowing for of advancements in evaluation and treatment.

I love to be outdoors – hiking, biking, camping, scuba diving, and traveling.