Differential Diagnosis for those with Hypothalamic Hamartoma Syndrome and autistic characteristics 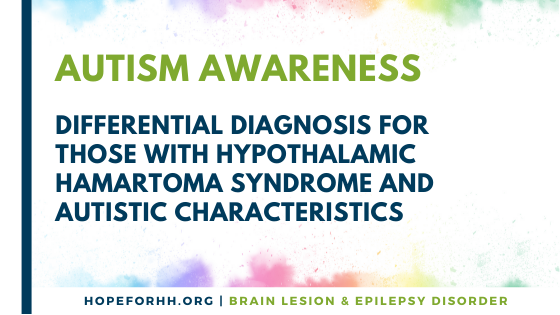 Differential Diagnosis for those with Hypothalamic Hamartoma Syndrome and autistic characteristics

We have been hearing about Autism Spectrum Disorders a great deal since the late 1990s and early 2000s, we are here in the year 2022 and the autistic community is trying to move past ‘Autism Awareness’ and into ‘Autism Acceptance.’ The challenge is that there is still a great amount of awareness that is needed in medical and educational professions, as well as within family units where a few loved ones demonstrate characteristics or may have already received a diagnosis. A spectrum disorder is just that, a group of symptoms that present with varying degrees of need for each individual diagnosed. Therefore, if you only have ever known one or two individuals with autism, you have not seen all of what autism has to offer. If a family member has been diagnosed with autism, there is a strong possibility that someone else in the family could meet the diagnostic criteria and present with completely different characteristics. A diagnosis of autism relies on a skilled expert to analyze observational data. While recently there are genetic markers for the disorder, an official blood test to diagnose does not exist for autism. A machine to analyze the brain for autism, like an MRI, does not exist. The disorder is based on behavioral observations. Therefore, the water can quickly become muddy across different evaluators, different reporters for the individual if it’s a child (parent/teachers), and especially so, if the water contains another spectrum of symptoms for something like a hypothalamic hamartoma.

To meet the criteria for an Autism Spectrum Disorder, according to the Diagnostic and Statistical Manual – Fifth Edition (DSM-V), a child must have persistent deficits in each of the three areas of social communication and interaction, as well as two of four types of restricted, repetitive behaviors.

Social communication and interaction include persistent deficits in all three of the following:

Restricted and/or repetitive patterns of behavior may include (must demonstrate 2 of 4):

Further qualifiers include that the symptoms must be present in the early developmental period; symptoms cause clinically significant impairment in social, occupational, or other important areas of current functioning; and that these disturbances are not better explained by intellectual disability or global developmental delay.

Assessing for an autism spectrum disorder requires a highly trained professional such as a developmental pediatrician, neurologist, or psychologist. The assessment usually takes a few hours and will include a detailed developmental history, direct standardized assessment of the individual, standardized behavior rating forms, and sometimes observations of the individual in different environments. Similar to that of HH, individuals with autism vary significantly in the level of support needs.

Read our previous blog from our Autism Awareness Series