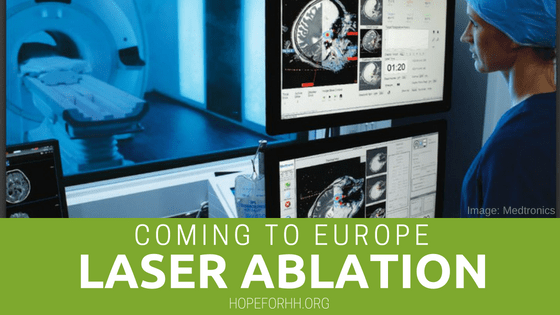 Medtronic recently announced they received clearance via the CE (Conformite Europeenne) Mark to launch the Visualase MRI-Guided Laser Ablation System in Europe. This is great news for international HH patients that have been unable to use private pay insurance to cover the cost of the procedure, or have been unable to raise the large amount of funding required to self-pay for the procedure in the US.

The Visualase MRI-Guided Laser Ablation System received Food and Drug Administration (FDA) clearance in the United States in July 2007, but it was not used on hypothalamic hamartomas until 2011-2012. With the Visualase system, laser (light) energy is delivered to the target area using an applicator. As light is delivered through the applicator, temperatures in the target area begin to rise, destroying the unwanted soft tissue. Because Visualase procedures are guided by MRI images, the procedure can provide precise and controlled ablation. Due to the minimally invasive nature of the procedure, patients typically go home the next day.

The Visualase Laser was first used successfully on HH patients in the US at Texas Children’s Hospital in Houston, Texas. Dr. Dan Curry and Dr. Angus Wilfong began reporting on their outcomes with the Visualase system and HH in 2012. The laser has proven extremely successful for this type of deep brain surgery and studies are now being compiled from several surgical centers to determine the long term outcomes for patients of all ages and HH sizes. The laser is now available at many major medical centers throughout the US. If you would like to see which US centers offer the laser, you can see our current list of centers on our website. This list is just a starting point as hospitals are adding the laser to their treatment options every day. If you know of a center, or have had HH laser surgery and would like to help us stay current, you can send the hospital and surgical team information to info@hopeforhh.org.

It is expected that the Laser will be available for initial use both in the UK and France by the end of 2018. We will keep the HH community updated on European hospitals taking HH patients as soon as we know more.

In the meantime, you can learn more about the MRI-Guided Laser Ablation System:

• You can see a video of how the laser system is used here.

And read some of the research here: