Living with HH and Planning a Family 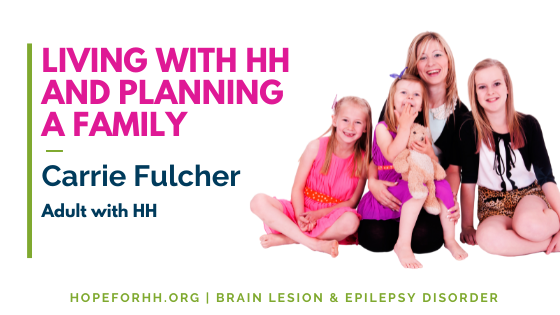 At the age of 20, my husband and I were considering having our first baby together.  I had so many concerns going around in my mind. Could the medication I was taking cause harm to our baby? Will the baby have seizures like me? How will I manage the sleepless nights? What will happen if I have a seizure while pregnant?

In the beginning, it was all so very nerve-wracking.  At each appointment, I could see on my notes I was classed as a “High-Risk pregnancy”.  I had never done this before, so I never knew what this meant.  I asked the specialist to explain how this would differ from a “normal” pregnancy.  It was explained to me that I would need to be monitored more closely to ensure the baby was developing at the correct rate without any birth defects, and I would also be kept a close eye on to ensure the pregnancy was not taking its toll on me – especially as I suffer with daily seizures.  Although hearing this was daunting, I also found it reassuring.

There were so many unknowns, as you can imagine, and I was on tender hooks the whole time.  One thing I am glad about is the fact that we planned for the baby in advance, so it gave me time to talk to my specialists beforehand.  They explained to us that one of the medications I was taking could possibly cause birth defects.  Thankfully we came up with a plan to put me on certain vitamins to help with the development of the baby and they also decreased the antiepileptic drug to avoid any potential harm. Although scary at the time, I coped quite well with the change and knew it was the right thing to do.  Not all medications are harmful, and in my case, it was just the one.  However, without that important discussion, I would have never of known.

On the plus side, being high risk also meant we got extra scans, and most importantly, it meant that I would have the right specialists present at the birth, should they be needed.  This thankfully didn’t mean I couldn’t have a normal birth.  Which as you could imagine, I was over the moon about as I was so desperate for this.   However, it did mean I wasn’t allowed a home birth or a water birth as this would have been too risky. The safer location was at the hospital with the experts available.  I think this was more to do with helping me and the baby if I had a seizure during the labour.

During the pregnancy, the change in hormones seemed to be a good thing for me. I was not only blossoming as a mum-to-be, but seizure-wise – I was quite well.  The biggest obstacle throughout the 9 months was fatigue, especially as the pregnancy was in its later stages.  I still had to cope with daily gelastics, complex partials, and tonic-clonic seizures, so it was hard at times.  I was lucky in the fact that I never caused harm to my bump. Having said that, I did do things very differently whilst pregnant. My meds were monitored the whole time and were increased at the later stages of the pregnancy because we saw an increase in seizures as I was becoming more and more tired.

I am the sort of person to push myself regardless of what my body tells me. However, during my pregnancy, I listened to my body and rested very often.  I was very lucky to have a husband that totally understood that I needed to rest often, even though I was working as well. Between us, we managed to juggle the household chores and shared any other jobs where possible.

The birth took its toll on me, not because of seizures which was always my main worry.  But because it was a long labour, which is usually the case for most first-time mums.  It did get to a point that the specialists had to intervene, but this was due to tiredness.  It turned out our baby was not so small so I would have needed the extra help regardless of the HH.  Thankfully, being classed as high risk meant I was in the right place to get the help I needed.  I am happy to say our daughter arrived safely with no birth defects, weighing a very healthy 8lb 10oz.  I fell in love instantly.

After doing research, I was happy knowing the HH was very unlikely to be passed down to her as I learned that the majority of cases happen as a case of misfortune.  A very small percentage can be linked to Pallister Hall syndrome, but this was not the case for me.  To say I was relieved is an understatement.

Adapting to my new life as a mum was amazing but very hard. No one really prepares you for the sleepless nights.  I desperately wanted to breastfeed and back then it was really drummed into you that this is what you should do.  It did get too much to be up every night for feedings, on top of dealing with the seizures, so I changed my approach to have a mixture of breastfeeding and formula milk.  It was nice to have had the option to be able to breastfeed like any other “normal” person as this was one thing I didn’t think I would be able to do because of the medication I was taking.

Despite my husband returning to work after his 2-week paternity leave, he still helped during the nights as much as he could and continued to do so even while I was on maternity leave.  However, after my maternity leave finished, I decided to decrease my hours to part-time.  This helped a lot to manage the fatigue that came with parenting.   I knew without the rest; my seizures would increase and therefore this was something I wanted to avoid – especially as it wasn’t just me I needed to worry about.  By doing this, I was able to enjoy the best years of my life watching our little one blossom.

My advice to anyone in the same position would be to not feel embarrassed to ask for help, and rest when you can. Sleep when the baby is sleeping, and don’t do what every first-time mum does by ensuring the house is immaculate every time you have a visitor!  The reality is no one cares if the washing has been missed or the polishing needs to be done.   I learned the hard way. I would often be asked by parents if I wanted to rest while they would look after our little girl.  On so many occasions I would say “no, I was fine” probably because I didn’t want to be a burden on anyone and because I was stubborn and wanted to do it all myself.  However, I soon realised they loved spending time with our baby, and admitting you are shattered and need to rest is the best thing to do.  The better rested I was, the more relaxed our time together was as mum and baby.

Having a baby is a big change to anyone’s life. Even those without an illness find it hard and tiring and need help, so it wouldn’t be surprising to feel exhausted during or after pregnancy while living with HH. 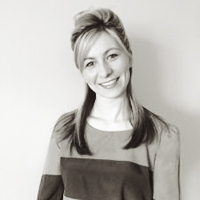 Obviously, the adjustment to motherhood with HH is not just about having seizures but how you can try to avoid harm to a baby whilst having them.  Looking back, changing my thought process was the most challenging part.  Prior to children, I would have just done things I wanted and if I had hurt myself it didn’t matter.  Now it was different – this little person relied on me to keep them safe, so I was always so much more cautious than most of my friends who had babies at the same time.  I’m glad I was this way as thankfully no harm ever came to my daughters.   I would not bathe our little girl unless my husband was present.  I would also ensure that when she was left on her own in a room, she was left in a safe way so she couldn’t have fallen or harmed herself in any way.  It’s safe to say we made it up as we went along…..which having spoken to other new mums, this is the case for us all.  As annoying as it was that I had to be extra careful, this just became our new norm and in time it was second nature.

I wanted to write this blog to show that living with a HH doesn’t have to stop you from becoming a parent.  It just means you may have to do things slightly differently.  You may have to be more patient with yourself and listen to your body more – but it doesn’t mean it’s not possible.  It is a worry when taking medication as some can have an adverse effect, but with monitoring and planning, it is possible your baby will come to no harm at all.

For me, planning and having the support was the key.  But all the worry, tiredness, and extra appointments were worth it.  So much so that we did it again 4 years after our first child!