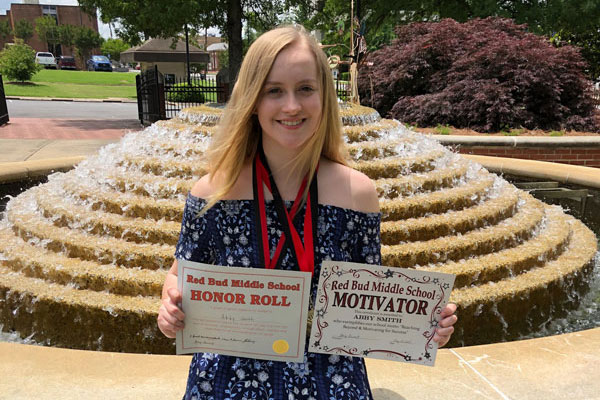 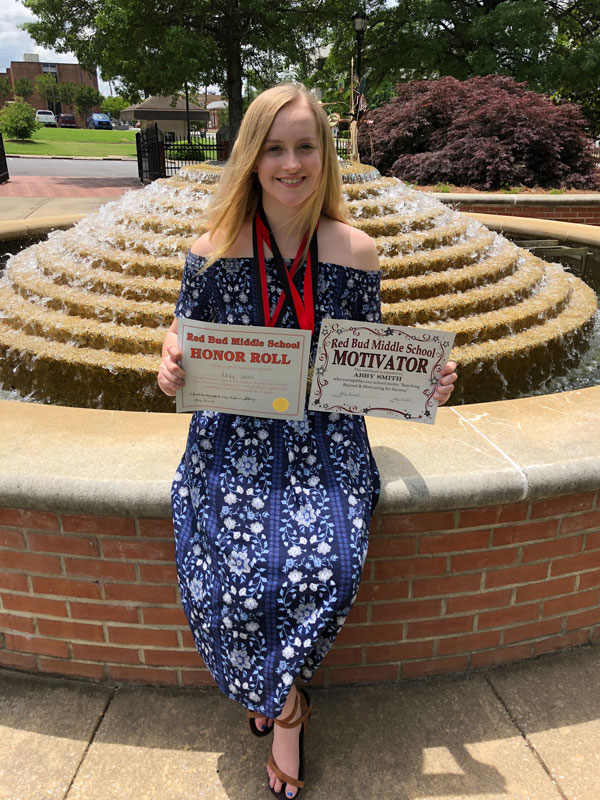 Our daughter’s name is Abigail “Abby” Joyce Smith, she is 12 years old now, born December 2005. In utero, the doctors noticed she had a small dilation in one of her kidneys but everything else was perfectly normal. She had a normal birth and she had an ultrasound on her kidney to see if anything had changed. One kidney still looked dilated inside but was functioning normally so they said it was a congenital abnormality that didn’t interfere with function, thank the Lord.

When we took her home, we did notice she would grunt sometimes and then be fine. The pediatrician said it was probably colic and not to worry. I didn’t think it was colic because her brother, who is 15 now, had a bad case of colic and it was totally different. When she got older, about 1 or 2, she would have these episodes of laughter, outbursts that lasted 20 to 30 sec., she would do this sometimes 10 times a day. I did research on line about involuntary laughing (gelastic seizures) but nothing ever came up. I had heard somewhere that seizures could sound like a laugh so I took her to see a pediatric neurologist when she was 4 years old. The neurologist didn’t order an MRI but only did an EEG in office study. Abby did have a laughing episode during this study but the results were negative for seizure activity. I was told that it was probably a tic and she would outgrow it.

Abby grew and developed normally but never stopped having the laughing spells. She did learn ways to keep from drawing attention to it in school. When Abby was 7 years old I took her to a different neurologist at a children’s hospital in a different city. They did another in office EEG and ordered an MRI. The EEG was normal again and instead of coming back to the hospital for the MRI we were told we could just have the MRI done at the small-town hospital where we live so we didn’t have to travel all the way there again. We had the MRI done and it was reported out as normal. I was told it was probably just a habit she had and they couldn’t find anything wrong with her.

At age 8 years old Abby started getting pubic hair and slimming up and she was taller than her classmates at that time. Abby started her period at age 9 and her laughing seizures started to disappear and change into what seemed like panic spells. Sometimes she would swallow repeatedly for 20 seconds and say things that didn’t make sense and not remember any of it. These would happen as often as 12 times a day. During some of these unaware type seizures she would wet herself. Sometimes her teachers would send her home from school because they thought she was getting sick. She was in 5th grade by then. She would cry and tell me this was ruining her life. I took her to the pediatrician and they gave her anxiety meds and medicine for tics but nothing helped. They also did a bone scan on her and it showed she was in precocious puberty. It never crossed my mind about her having early puberty. I knew some friends whose kids had their period at age 9 so I thought it was normal. The doctor made us another appointment to see an endocrinologist. The endocrinologist didn’t do any testing to see why she was in early onset puberty, he did offer to give her medicine to stop it for a couple years but she was already 5 foot 4 and he said it would only give her a few more inches in height so we decided not to stop it.

After that I got online and searched for the best epilepsy doctor in Atlanta. I was sure these new panic spells she was having must be a seizure and thought an epilepsy specialist would be the person to ask. I found Dr. Flamini at Panda neurology in Atlanta, Ga. I told him the whole story of Abby and he seemed to know what it was right away and scheduled an MRI at Children’s of Atlanta. He insisted we do the MRI there and nowhere else. As soon as we got home the phone rang with the doctor telling us Abby had a Hypothalamic hamartoma and that it wouldn’t respond to seizure medicine. They made us an appointment with a neurosurgeon. We were devastated to say the least. I immediately started researching what this was and what options were available. I found out that this is often missed on MRI unless completed per a specific MRI-protocol and misdiagnosed because it is rare. Abby had to have a lot of tests, one was a cognitive and psychological assessment. Abby is fortunate to be considered high functioning and only has some short-term memory issues. 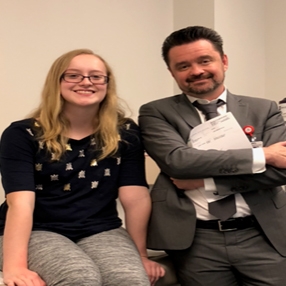 We decided to not have her surgery in Atlanta just because they had not performed many of that type of surgery on that particular area of the brain. We decided to go to Texas Children’s Hospital in Houston, Texas as they have an Hypothalamic Hamartoma Program. Doctor Daniel Curry had pioneered the laser ablation technique and had performed close to a hundred successful surgeries on HH patients from around the world. Abby had her surgery February 26, 2018, it took 6 hours. She was discharged in 2 days. 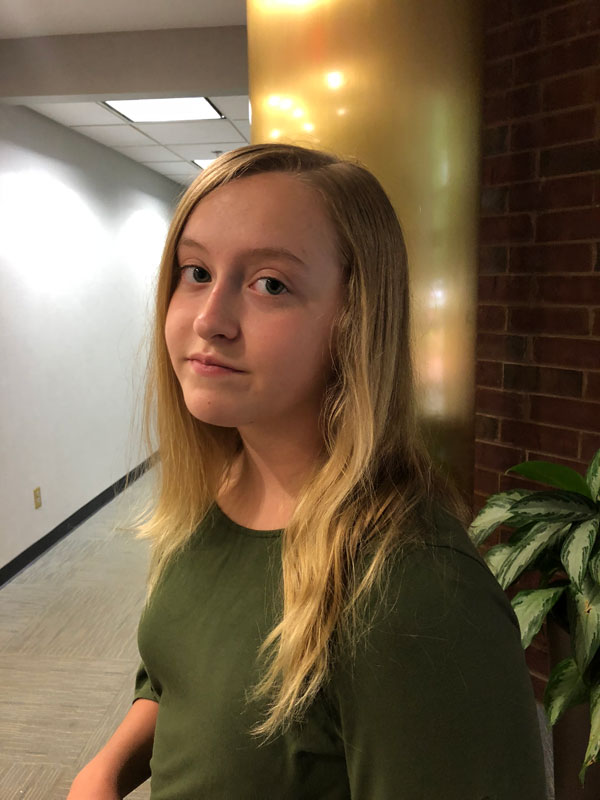 She has not had any of the previous seizures she had before surgery. She had a staring seizure the day after for a few seconds and had a few auras at 2 months out. She did have some nerve pain in her scalp but that seems to be subsiding and she does have some bad headaches. Abby’s 3 month MRI looked great. She did gain about 35 lbs in a month and the doctors think it’s just from being on the steroids but it left her with a lot of stretch marks. She has also been very emotional. I took her to an endocrinologist to check her hormones and it all looks good. The doctors seem to think that it’s probably just the typical middle school girl emotional rollercoaster and its normal. I am taking her to see a therapist anyway because she has been through a lot this year and I feel it has taken a toll on her self-image, self-esteem and emotions. I thank the Lord Jesus for taking away the seizures and helping us find the best help for her when we did. Lord willing the seizures are gone for good. We were blessed to have help getting us there from our awesome family, friends and co-workers who volunteered and organized several fundraisers for us.