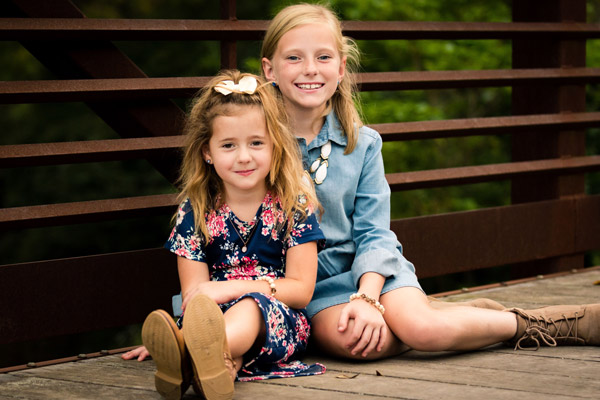 In October 2018, we first noticed Chloe having what we called staring episodes. She would all of sudden have a blank facial expression and not respond to us. These episodes would last for 45 seconds – 1 minute. Afterward, she would seem confused and sometimes tired. We noticed that these would follow these bouts of laughter which we didn’t know at the time were gelastic (laughing) seizures.

She has had these gelastic seizures since infancy.  We had always thought these bouts of laughter were a tic of some sort and initially these seizures would only occur 1 or 2 times per month.  Over time they became more frequent escalating to once a week and then more often.

After talking to her doctor about these episodes we scheduled a routine EEG in November 2018.  This EEG that came back normal, however, we noticed seizures were increasing in frequency so we pushed the doctors to conduct a longer EEG and were then set up to see a neurologist at the beginning of January 2019.

As we waited for the second EEG we continued to research and came across an article on gelastic seizures. We thought this described Chloe perfectly. Her bouts of laughter were actually laughing seizures. So once we met with a neurologist and she saw her have a laughing seizure she scheduled us for an MRI and a 96 hour EEG.   On January 25th we went in for the MRI and Chloe did great with the sedation!   By the time we got home from the MRI appointment the neurologist was already calling with results. They confirmed they found a hypothalamic hamartoma (HH) and indicated she would need to have surgery in the near future as this type of epilepsy is mostly drug-resistant.

After the HH diagnosis, things got crazy with all sorts of baseline testing being completed.  Obtaining this baseline is important as the hypothalamus controls so many functions in the body. At the same time, Chloe was also started on valproic acid, an anti-epileptic drug (AED), which had helped a bit with the staring seizures but had no impact on the laughing seizures.

In February 2019, Chloe had endocrine testing complete and the results were normal. We also had neuropsychology testing and as a result, we learned that a lot of her behavior issues were stemming from the hypothalamic hamartoma.  We learned Chloe had trouble focusing due to the seizures.  We had originally thought she was just being defiant but in reality, she didn’t remember previous instructions she had been given. The behavior issues were difficult because she lacked impulse control and this would lead to her just running off, putting herself or others in harm’s way.

We did the 96 hour EEG in April 2019 and as a result we found out that during her staring seizures her whole left side of her brain was paralyzed which lead to her inability to talk.  This explained why she wasn’t able to respond during these seizures.  The EEG also identified Chloe was experiencing sparks in the back left side of her brain which could result in new seizures developing in the future.

Once we had received the EEG results we started searching for the best surgeon for Chloe’s hypothalamic hamartoma (HH) diagnosis. We went through the interview process with 3 different hospitals and made our decision with Dr. Daniel Curry from Texas Children’s Hospital in Houston. He’s the most knowledgeable and experienced with the HH surgery. Since we had already completed the MRI, EEG and baseline testing locally we scheduled the surgery and travel to Houston for pre-surgery testing.

We traveled from Kansas City to Houston and the MRI scanning of the brain for surgery was completed. She started steroids before surgery to help with postoperative swelling. On August 9th she had her surgery and Dr. Curry indicated it went very well.  He was pleased that he was able to get about 90% of the HH leaving an area that was close to her memory center. Chloe woke from surgery and still had her personality and remembered everything!

We stayed in Houston until her post-surgery appointment 11 days later (21 days total). She slept a lot after surgery. We would eat play for a bit and then sleep and repeat. Chloe has not had any seizures since her surgery!

She gained about 7 lbs with the steroids and lost it about a month later as her eating habits went back to normal. Our endocrinologist in Kansas City had us stress dose her with steroids a couple of times when she came down with a fever, however, this was just in case her adrenal gland wasn’t working properly as a result surgery and high doses of steroids she had been giving post-op. Chloe did develop some excessive hair growth on her forehead, back, and legs and we believe this is a result of the steroids and will eventually go away.

Chloe’s listening skills and behavior improved so much. Her teacher says it’s like a different student as she is eager to learn and no longer putting herself or others in harm’s way.

We had her 3-month post-surgery check-up recently and all looked good on the MRI. She continues to be seizure-free and we are excited for her progress as she will start kindergarten next fall.

We would love for our story to help others in this difficult time with hope and support.

Do you want to know more about Chloe’s HH journey? Make sure to check out the following links.

Find out how Chloe and Hugh Jackman connected after her surgery.

Living with HH and Planning a Family
December 18, 2019