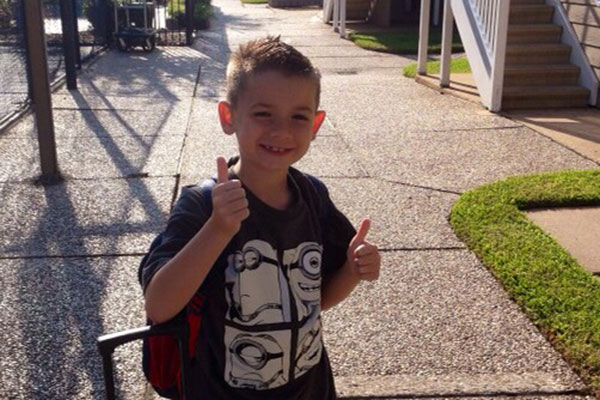 It has been awhile since I have written. I guess since Christopher’s laser ablation surgery he has been doing so well and there has not been much to say. He completed kindergarten this past school year without any learning problems. He has become a avid reader and continues to love being a football player. He has been off all seizure medication for over a year now and his EEG’s remain completely normal. No sign of HH at all.

We returned last week from Houston were we saw both Drs. Wilfong and Curry for what right now was his final appointment. It has been a little over 2 years since his laser ablation procedure. It was a very emotional day for me as we left for the airport to go back home. I guess it was a day of all emotions rolled into one. All I ever hoped once we learned he had HH was a chance at a seizure and HH symptom free life. We knew being this treatment was new it may be a gamble worth taking. We also knew that technology brings new treatments in medicine. As a nurse for over 20 years I see it firsthand and I know it always has to start somewhere.

After we met both Drs. Wilfong and Dr. Curry we knew they wanted to help our son. They were honest and open with every aspect of laser ablation, but we could see, that they both saw promise with this treatment. They both felt they could safely try to ablate this lesion, without any damaging side effects of great detriment. They promised they would do their best, not do anything risky, and most importantly do what they hoped to accomplish. This was to ablate the HH to stop the havoc in his brain.

I can say now 2 years later that goal has been accomplished. I cried flying down to Houston with tears of fear, and uncertainty. Last week I cried tears of joy and of promise. Saying good bye to the doctors and thanking them was very hard. I saw firsthand with my son how dedicated they are helping our HH kids. They have helped so many and continue to do so with a passion. It has been an amazing journey and a life lesson on so many levels. I am sure many of you reading this know exactly what I mean.

It has changed our family, and Christopher’s story has touched many people. He is an amazing boy who has been given so much by so many, but especially by Dr. Wilfong and Dr. Curry..two men giving themselves unselfishly to help HH patients.