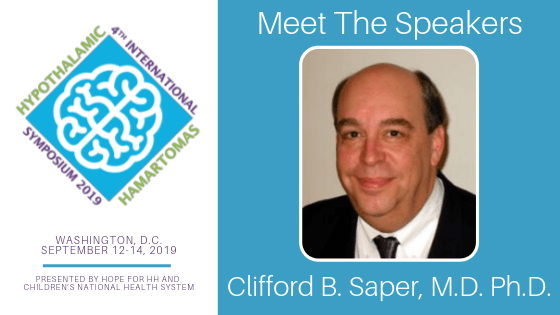 Hope for HH is co-sponsoring the 4th International Symposium on Hypothalamic Hamartomas – a professional symposium for HH investigators, clinicians and researchers – in Washington DC Sept. 12-14. The Symposium aims to identify gaps in understanding and opportunities for future HH research studies and collaborations to improve diagnosis, treatment and care of both the seizures as well as the other endocrinological and neuropsychological symptoms.

In this blog series, we will introduce you to several internationally recognized clinicians and researchers who are thought leaders both inside and outside of HH and who will serve as facilitators, presenters and discussants at the Symposium. Highlights of the Symposium will also be available to the HH patient and professional community following the meeting.

Clifford B. Saper received his M.D. and Ph.D. degrees and did his internship in internal medicine at Washington University School of Medicine in St. Louis, before doing a neurology residency at Cornell University Medical Center- New York Hospital.  He then joined the faculty of Washington University School of Medicine where he served from 1981-1985 as Assistant and then Associate Professor of Neurology and Anatomy and Neurobiology.  He then moved to the University of Chicago, where from 1985-1992 he was an Associate Professor, then William D. Mabie Professor of Physiology and Neurology, and Chairman of the Committee on Neurobiology.  In 1992, he moved to his present position at Harvard Medical School, where he is the James Jackson Putnam Professor of Neurology and Neuroscience and Chairman of the Harvard Department of Neurology at Beth Israel Deaconess Medical Center.  Dr. Saper served from 1994-2011 as the Editor-in-chief of the Journal of Comparative Neurology and is currently the Editor-in-Chief of Annals of Neurology.  Dr. Saper has received a Javits Neuroscience Investigator Award from the National Institutes of Health, and was named one of the 100 most frequently cited neuroscientists by the Institute for Scientific Information.  He has served as Vice President and Councilor of the American Neurological Association, and has served on the Publications Committee and has chaired the Program Committee of both that organization and the Society for Neuroscience.  Dr. Saper was elected to the National Academy of Medicine, and has been named a Fellow of the American Academy of Neurology, the American Association for the Advancement of Science, and the Royal College of Physicians (London) and a member of the American Association of Physicians.

Dr. Saper will be presenting a keynote talk on the anatomy and neurobiology of the hypothalmus.

I trained as an MD/PhD, with my research on the anatomy of the hypothalamus.  I have subsequently worked on hypothalamic connections and how they affect wake-sleep, feeding behavior, drinking behavior and regulation of body temperature, response to fever, and stress responses.

I then trained as a neurologist, and became interested in the relatively rare patients who have hypothalamic disorders.  Hypothalamic hamartoma is certainly one of the most distinct and interesting of these diseases.  Most hamartomas are derived from cells of a particular type.  I have been interested for a long time in understanding which cells overgrow in hypothalamic hamartoma, and how they affect function, such as gelastic epilepsy.