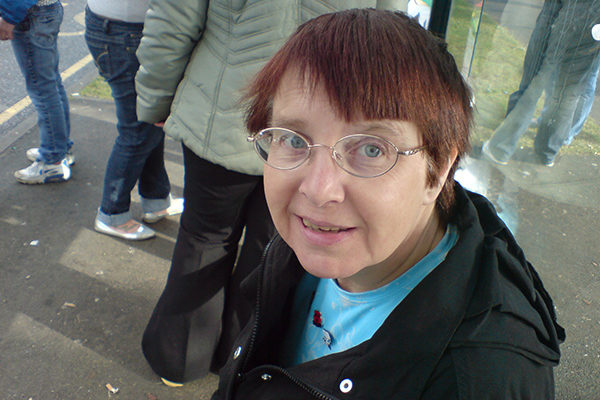 HH is for life.

In 1957 my wife was born, it was a normal birth but within weeks it was clear all was not right with Little Elizabeth. Doctors in those days had no idea how to diagnose complicated conditions in babies. As Elizabeth grew Epilepsy was confirmed but no treatments made any difference and the strange ‘Rage’ type outbursts led them to believe there was some kind of brain damage. Despite this Elizabeth was a happy child until school age. Her first school quickly decided that they could not cope with the unpredictable child with a tendency to burst out laughing for no reason. They moved her to a Special school for children with learning difficulties and from that point on she was denied a normal upbringing. 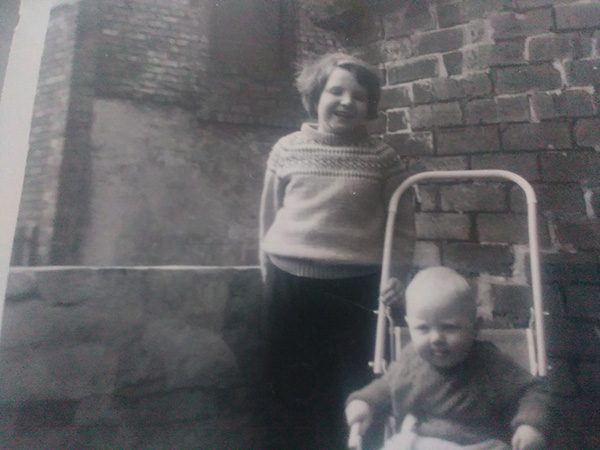 Specialists in the early 1960’s did not know about the lesions that were causing the Gelastic attacks and focused on the secondary effects of epilepsy.

Elizabeth’s parents were told that she would probably never leave home, get married or have children. These opinions were drilled into her mother and father, who became over protective and resigned to the future mapped out by doctors who, themselves, were scratching their own heads.

Despite poor schooling, Elizabeth flourished and became an excellent reader and writer but it was clear she was not maturing normally and remained innocent and gullible in a lot of ways. She struggled to hold down a job and moved from place to place doing menial tasks like dishwashing and sandwich making. She became unhappy and the rage attacks became less acceptable to those around her.

Elizabeth sought help when she saw an advertisement promoting a local Action for Epilepsy Group and phoned the leader. That was me and I discovered an aspect of Epilepsy I did not even know existed. That was almost 40 years ago, and it was to change both of our lives.

I was horrified to discover her parents’ attitude towards their daughter. They had their reasons, given the misinformation they had been fed over the years, but Elizabeth was now in her early 20’s, a young woman seeking a life of her own.

I suffered from Epilepsy myself, but it was well controlled, and I only had occasional relapses. My older brother had died 2 years earlier from complications in an epileptic attack. After I got over the shock I was galvanized into action.

Elizabeth was looking to me for help, I found her to be a very capable person with problems. I remember a long conversation I had with her mother and father when I was trying to explain that they needed to let her off the leash. It was then that they said they were told she would never marry or have children. They seemed surprised when I said that was not their decision it was Elizabeth’s and whoever she met. I did not realize then that the someone would be me……

I must admit I do not really know if Elizabeth married me out of love or need. I of course love her madly.

We spent the first couple of years visiting consultants seeking more guidance, but the subject of Hypothalamic Hamartomas NEVER came up. I was ignorant to the condition and was seeking treatment for Epilepsy. 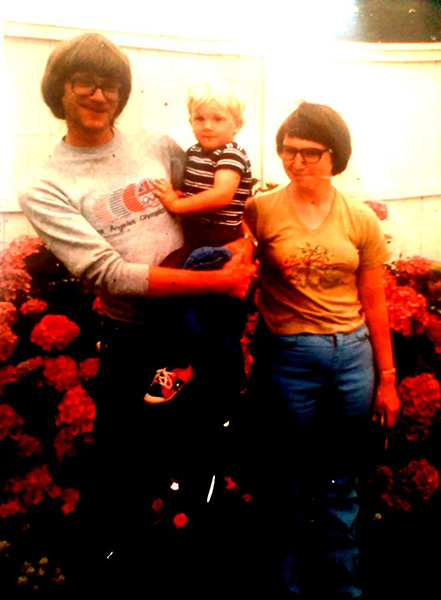 Elizabeth and I had a son. She changed her drugs during the pregnancy and but there was no change in her various attacks. She was a great mother to our son. I was amazed at how natural it all seemed to her. Even then her own mother had an attitude towards Elizabeth and at one point said to her if she did anything wrong to her grandson she would call Social Services! Understandably, Elizabeth sought no help or advice from her mother. She was amazing nurturing our son so well. I was so proud of her. Our son is Epilepsy free.

As he grew and became a person, Elizabeth had more difficulty controlling her attitude to more complicated issues and I had to mediate quite a lot, but things never got too bad.

Suddenly, out of the blue, her consultant raised the issue of a possible operation for her condition. They were now experimenting with the removal of the lesions. Her attacks were becoming worse and a life time of constant drugs, dropdown attacks and embarrassing Gelastic episodes forced her to consider the surgery. That was more than 20 years ago.

The operation was a nightmare, she was so ill after and it took months to recover. We were told after that they were only able to remove one third of the lesion safely. Her epilepsy stopped completely!! For three months Elizabeth became a different person. Happier, more confident and much more loving. Then the attacks returned and over the months got worse. The Gelastic attacks became more frequent and within a year she was having them almost daily. Her life was worse than ever. More drugs were tried as the years went by, but nothing worked. She wished with all of her heart that she had refused the operation. Eventually, as she aged, the side effects of a lifetime of her condition began to cause brain damage.

Two years ago, something terrible happened. She began to get inexplicable strange episodes every time she tried to go to sleep. It was very disturbing to watch as she struggled with the anguish of the lack of sleep. She also began to behave erratically having episodes of anger and unreasonable attitudes. Our marriage was breaking up, I was seriously considering leaving her to seek a life of peace. I knew that would destroy her completely and hung on.  Then one night it got so bad I took her to the Accident and Emergency Department of the city hospital. She was admitted immediately and an amazing doctor from Portugal seemed to know straight away what to do. He changed her main drug and within 2 days things got better. He explained that her Hypothalamic Hamartoma was reaching a critical stage and she could not survive without another operation. We were crushed at the thought of her head being cracked open again, but he laughed and said things had moved on and the operation would be done with a Gamma Knife. Our blank faces moved him to explain in detail how they used radiation tightly focused to change the genetic structure of the tumor. He explained it took many months to get results and things sometimes got worse, because of swelling, before they got better. 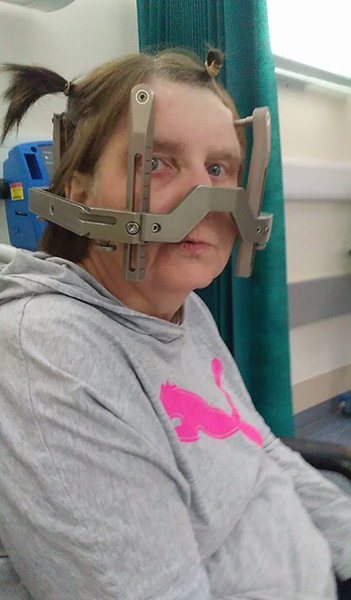 In Britain NHS wheels grind slowly but in a few months we had a consultation. Elizabeth’s need was assessed as urgent, but her type of tumor was not on the list at the hospital where the procedure was to be done. We had to wait while they applied for funding. It took another 3 months, but we got a phone call to say they were going to pick us up and take us the 150 miles in a medicar. I was given a room to stay in overnight while they scanned her and prepared for the operation. It only took eighty minutes to treat the tumor. The night before Elizabeth had a bad attack but again the attacks stopped immediately following the treatment. The consultants and surgeons were at a loss to explain how the effects were instant, but they and we were over the moon.

We had beaten the condition, all be it a little late. Most amazingly her personality changed in a wonderful way. She was like the woman I fell in love with again. I felt a great sense of peace and relief. She was smiling again, something she had not done for years. We could get on a bus and walk about town with no fear of her collapsing and losing control of her bladder. We were close again.

Elizabeth has many other health problems both related and unrelated to her HH. One condition is also rare, it is called Bullous Pemphigoid, an autoimmune condition that makes her skin attack itself and creates rashes and sometimes blisters. How can one person have 2 rare conditions, not related, I do not know, but she did not feel the elation I felt as she still suffers, but life has got a lot easier and I do not have to follow her around when she leaves the house.

Unfortunately, now, a year after the operation, her attacks are returning, nothing like as bad as they were. She is still independent and there could still be changes to come.

HH is a way of life, sometimes it will try to destroy a person’s life. I think we are at a stage where this should not happen, we have the technology, but we lack the will to help all of those who suffer with this rare condition. We must fight to ensure everything is done as soon as possible to help young people with HH. 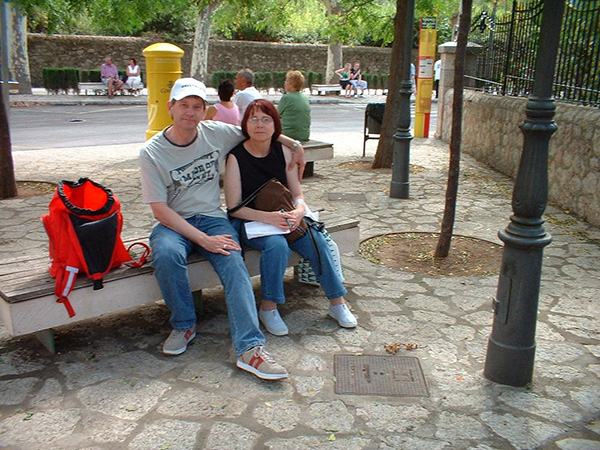