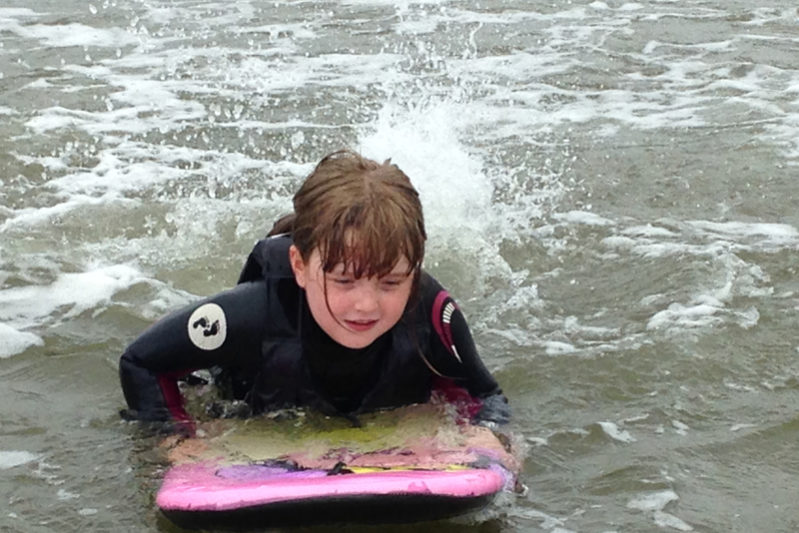 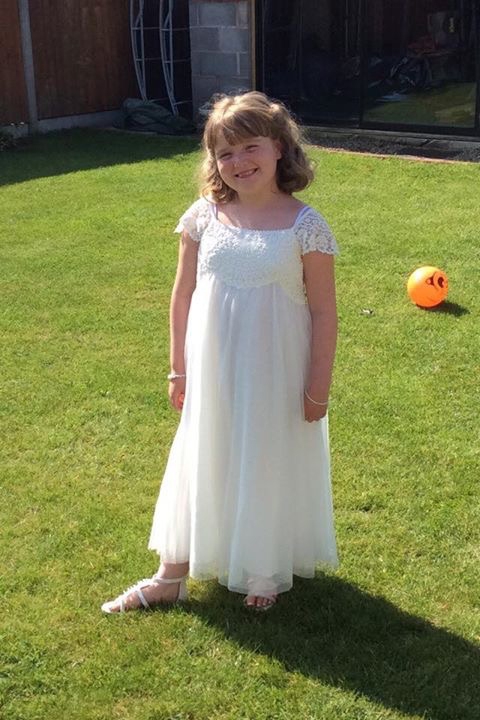 My pregnancy with Faith was difficult, I developed a strange rash, which we never really got to the bottom of.  Due to the rash I had an ultrasound at 32wks to check the size of the baby.  It was during this scan that the radiologist noticed there was something not right.

This was the beginning of a long waiting game, every appointment seemed to drag us on to the next not really knowing much more.  We were told things from the baby would not survive the delivery, the baby had a cancerous tumor, to the baby had no digits or facial features. Then following a 3d scan, now at 35 weeks they confirmed that the baby, which we now knew was a girl had a Hypothalamic Hamartoma which we were told at this point would at the most effect the baby’s hormones.

Faith was delivered naturally at 37 weeks gestation a health little girl, though from day one she would at times become very stiff in my arms and start making this strange noise almost like she was struggling for breath.  The consultant who Faith was under at the time tried to relieve any of my anxieties by telling me that a HH is a dead piece of skin that some people can live their whole lives with and never know they have it and that the most that Faith could develop, may be Precocious puberty.

Every evening Faith would become very unsettled making these strange noises and movements at times it could go on all night.  I spoke to my midwife, health visitor and consultant who all tried to calm me by saying it was Colic, normal baby movements or my favorite reason was ‘my anxieties’.  These symptoms went on for weeks and slowly became more frequent throughout the day until eventually one day she woke so distressed and stiff I couldn’t do a thing with her.  Faith eventually had a further MRI which initially led the doctors to think that the lesion had actually grown and was not a HH so we were referred to our local specialist hospital that night.

The next few days involved lots of tests, and a biopsy.  As Faiths HH was very large it had caused Hydrocephalus (excess fluid in the brain) the Neurosurgeon felt he could relieve this without using a shunt.  His procedure worked and he did relieve the Hydrocephalus and a confirmed diagnosis of HH was established.  We had  lots of consultations with this Neurosurgeon over the next few years, he was unsure initially about debulking her HH due to the nature of the surgery, he did not want to risk her development as she was so young and he was unsure as to how much debulking only would relieve her symptoms.  He assured us that he was going to discuss her case with colleagues he knew who had more experience with HH.

Endocrine wise, Faith developed PP at 3 months old, initially I had noticed breast development but this had been dismissed, then a few weeks later we noticed streaks of blood in her nappies.  Further tests confirmed that she was in puberty.  From this age Faith has had a hormone implant injection every 8 weeks which thankfully has controlled this side of her condition.

Faith continued to have 100’s of seizures a day, we had tried a cocktail of different AED’s but nothing every helped, then when she was three years old we had a phone call from the Neuro surgeon asking us to come in and see him.  He explained that he had made contact with a surgeon who has had lots of experience with HH’s who had agreed the Transcallosal route he wanted to take. He explained that he would not be looking at removing it all but he was confident that he could debulk a good %. At this point even though the news was very scary we were both so relieved, we knew she could not go on the way she was having so many seizures. So Faith had her first surgery in October 2010, she recovered remarkably and we were home within a week.  She had no complications following the surgery and developed no further symptoms, unfortunately the seizures continued but they were greatly reduced. She went from having 100’s a day, to two months later having less than 50 a day to 6 months later having less than 24 a day.  The seizures remained in this pattern then for about two years, when we noticed that during her Gelastics she was also starting to turn her head which we were later to learn was part of her Complex partial seizures.  The Neurologist knowing that we had exhausted all the usual options for AED’s introduced us to a very new medication in the U.K for children with Epilepsy at the time called Zonisamide.  This became a wonder drug for Faith as it not only stopped the Complex Partial but it also reduced her Gelastic even more for a good couple of years, though as I’m sure many of you have experienced, this honeymoon period was short lived and the Complex soon reared their ugly head again.

Faith’s main problem has been around her rages and social difficulties.  From a very young age Faith has experienced difficulties with feeling anxious, agitated or even angry in certain circumstances.  She used to struggle putting certain clothes on, become very upset if the seams didn’t feel right or if lines on her leggings didn’t sit just the way she wanted them.  She very much depended on routine and she would insist certain things were done in the same way at the same time.

The last two years have been very difficult as the aggression had escalated to a point that she would self harm and lash out at family members, hitting, biting, kicking and even throwing things with the intent on hurting you.  I had reached a point of despair and I felt so desperate for her over this last year, not only were we struggling with her rages but her seizures where also out of control, again the Complex Partials were taking over.  As things were becoming so difficult our Neurologist had reached out to our Neuro surgeon again, we had asked about Laser Ablation for Faith but had been told that due to the size and location of her HH she was not an ideal candidate for this approach.

After a few months again discussing Faiths case with other Surgeons, our Surgeon called us in for a consultation to discuss the option of again performing a Transcallosol approach and removing as much of the HH that was felt was safe too.  We discussed this at length with the whole team and we all agreed that as Faith was struggling so much at this time, we needed to act before things became any worse.

Faith went in for Surgery on 31 November 2016, obviously this time was going to be very different as she was now 9.  Many times over the last two years she had said to me that she didn’t want to carry on the way she was, she hated her seizures and found her rages frightening.  We explained to her that the Surgeon had told us, he felt he could take some of her lump away and hopefully stop her seizures.  She was very excited and cried saying to me ‘I can’t imagine never having my seizures mummy’.  Oh how I desperately hoped this would be the outcome.

I think it’s the hardest thing I’ve ever done and the longest day of our life, 12 hours later we got her back with a bandage around her head and still fast asleep.   The next few days we watched her like a hawk, but unlike the last time we did not see a single seizure.  We were both overwhelmed and slightly unnerved as though just waiting to see that smirk and hear that noise but I’m happy to say 2 months later and we still haven’t.  There are days were I think I see her pupils dilate and see the slightest smirk on her face but then it disappears again.  Initially when we were discharged she was having seizures in her sleep, we had a horrible day five days after surgery.  As she slept one afternoon she started having a seizure, but it was unlike any she had had in the past, her whole body seemed to be jerking.  It only lasted seconds but it was enough to make us both feel sick and it was followed by another four all as short lived as the first.  From that day on this was her pattern, as soon as she fell asleep she would have a cluster of 3-4 seizures.  Over the following weeks, the less she slept the less she appeared to be doing them.  In herself she is a different person so much more relaxed, we have seen no sign of her rages, she is a little emotional at times and can cry for no reason but I think at this stage we have to remember it is still very early days and she is entitled to get a little emotional. There had been concerns of her developing Diabetes Insipidus but thankfully we have seen no sign of this or any other complications following her surgery.

I have to say my deepest wish has come true for Faith though I never thought it possible, I can’t thank the team at Alder Hey Hospital enough, we in the Jackson house think they are all amazing. 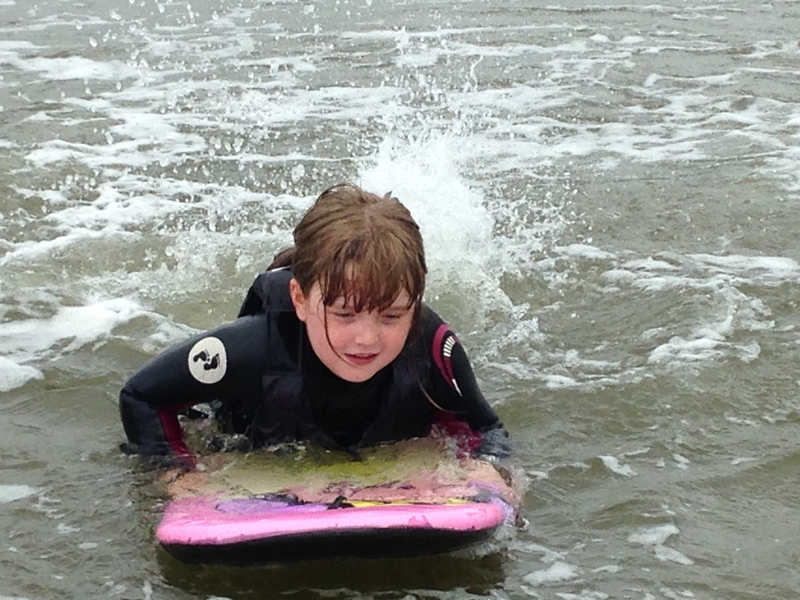