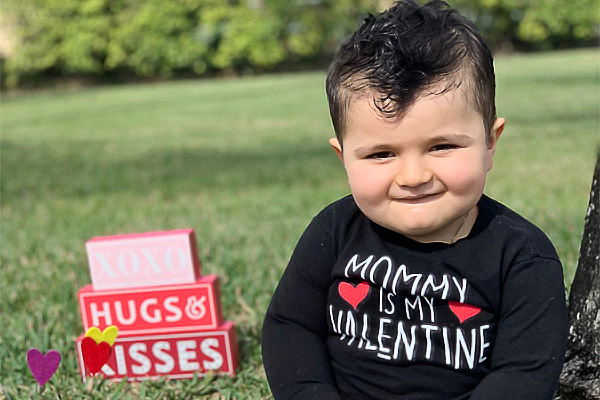 Appreciate the little moments in life. That’s what my almost three-year-old son has taught me.

Francesco was born, full-term and completely healthy boy, on December 27, 2016. He came into a world that loved and cherished him; a support system of three beautiful step siblings, two loving parents, two clever dogs, and extended family and friends that had nothing but love to share. Being my first-born child, I was overwhelmed with excitement and joy, prepared to experience the millions of emotions that come with motherhood.

Yet, I was not anticipating the emotions I would feel on August 30, 2017, when my 8-month-old son was diagnosed with hypothalamic hamartoma.

Early visits to the pediatrician’s office revealed Francesco was having trouble gaining weight. Later, he developed torticollis. Soon after, he began making constant, unusual laughing noises, similar to those made when a child is laughing. At 6-months old, he was diagnosed with reflux. Thereafter, Francesco was given reflux medication and assigned to continual physical therapy to help him recover.

One evening in August 2017, one of my dogs began getting jumpy and acting unusual near the bedroom door. When I went towards the crib to check on my son, I found him in a locked position; appearing stiff and tense. Having worked in an assisted living facility, I immediately realized my son was having a seizure. Over a 3-day period, the seizures occurred several more times. One strong seizure and EEG later and the seizures were confirmed.

Francesco was officially started on treatment and later diagnosed with a hypothalamic hamartoma by Dr. Sanjiv Bhatia at Nicklaus Children’s Hospital in Miami.

Francesco underwent a 10-hour long surgery, on April 5, 2018. After a two-week recuperation period, in the ICU, his “reflux” completely disappeared and his quality of life improved. He continues to be treated for seizures but has recently started a new drug that has been very effective in addition to the Ketogenic Diet. Francesco is making progress in his development but still has a long way to go in his journey.

I am overwhelmed with gratitude and hopefulness when I think about how far he’s come.

Overall, these last few years have taught me the importance of not taking a single day for granted, of appreciating every single moment, and not stressing about silly, insignificant details. It’s critical to just take a step back, once in a while, and look around at how much you have and how much you take for granted. Because at the end of the day, all that really matters is the health of yourself and your loved ones.

I definitely could not be where I am today if it wasn’t for the constant, never-ending, support of my family, friends, colleagues and an mazing husband. My son’s story isn’t over, yet, but I am prepared and fully ready for whatever challenge may come our way. My son is a fighter and a champion and I am thankful to God that He picked me to be his mom.