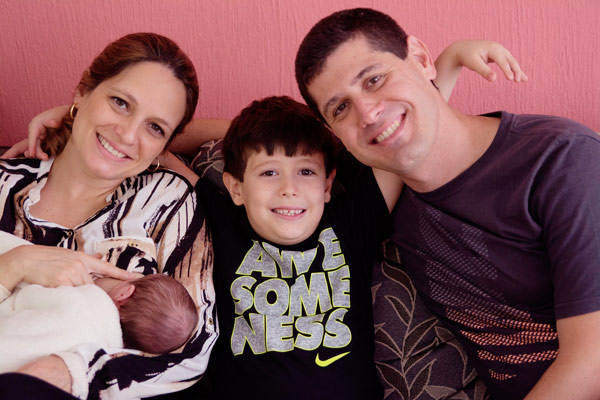 My name is Renato and I live in Brazil with my wife and 2 kids. I am here to tell you about my oldest son, Guilherme.

He was born in 2011. Along with the hypothalamic hamartoma (HH), Guilherme also was born with polydactyly of both hands and both feet. For many reasons, I say he is really unique.

It took only few weeks after birth for the first gelastic seizures to show up.
They weren’t long, but they were very frequent, usually 5 – 6 per hour. Often there were nights when the seizures worsened and he couldn’t get to sleep.

I can’t tell how many times we drove to the hospital and the doctors were unable to reach a diagnosis. Some told us he had reflux, others tried for meningitis and others said he had nothing.

It was only when he was 8 months that some pubic hair appeared and a doctor suspected something very bad. We were sent to a pediatric neurological center at a renowned public hospital in Sao Paulo.
After few exams, we heard for the first time the expression: hypothalamic hamartoma. They explain in Guilherme’s case, the hamartoma was the cause of both the gelastic seizures and the precocious puberty. The doctor who cared for stated that surgery would likely to be needed.

Guilherme had his surgery when he was 1 year, 1 month and 4 days old. Guilherme was reborn on that same day. The doctors believe they were able to remove 90% of the hh.

The seizures never appeared again and instead of a tired and hopeless Guilherme we could note the beautiful face he had. The happiness was presented to him and he started his race to regain the time he had lost.

Almost 7 years after the surgery Guilherme still struggles to be in the same development pace of his colleagues, but we kept saying that he is able to do everything as long as he believes.

My wife and I are still trying to figure out how to deal with some of his behavior issues. However, these seem to occur at times when he is challenged with a new situation. We are aware that it is not easy to be him and we try hard to understand him and make his life better.

He is talkative, very fond of his little sister and wants to be a singer when he becomes an adult.

From the stories we hear about patients with this condition, I can’t deny Guilherme was blessed and I hope God may bring comfort and strength to parents and kids who suffer from this terrible disease. Our hope is these few words we share about Guilherme’s HH story will help all of you in the same way as they helped us in the moments we wrote them.