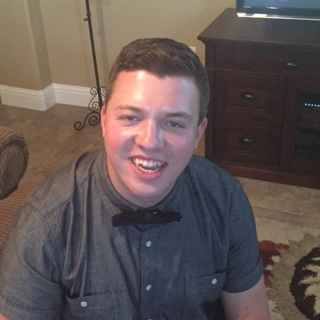 Jacob was born April 11, 1998.  He was such a cute bundle of golden hair.  We took him home and he would make these funny noises, especially when he was sleeping.  It sounded like laughter but we just thought he was a strange little one.  Fast forward a couple of years when he was able to communicate more.  He would run to me with fear on his face and tell me, “Mommy, I’m scared.”  Then he would “giggle” with fear and look to the left.  This would happen several times a day but I didn’t put the pieces together until he was three years old.

We took him to a local neurologist who did an EEG.  Nothing showed up but he was put on Tegretol.  I remember not too long after taking the pills that he would wake up trembling and would wet the bed.  I was not liking how this affected him so we went to UC Davis.  He was finally given an MRI.  We were told that they had found something which they thought might be a hypothalamic hamartoma. The doctor made it seem like not too big of a deal.  I was very upset and went on-line.  That is when I found the HHUGS group.

I would like to say that this is when we stopped going to that hospital but I had just had a baby and it was closer to us.  So, we had his first brain surgery at the age of 4.  They were unable to remove all of the tumor for fear of him having a stroke.  Next, we were told that he had cancer.  We were devastated.  Shortly, after the surgeon told us this the neurologist came in and basically said that he wanted the tumor tested for HH so he sent it off to the Mayo Clinic.

In the meantime, months went by and we met with several doctors, preparing to have chemotherapy.  Finally, I got a phone call telling me that Jacob did not have cancer but it was HH.  I have to tell you that I jumped for joy because cancer scared me more.  From there, we were fortunate enough to have Dr. Rosenfeld remove the rest of the tumor in 2003, which was nine months from his first surgery.  We were told that all the tumor was removed and we really saw such a difference in Jacob.  For the first time ever, my son was alert, singing, and engaging with us.  We were overjoyed at the outcome.  He ended up needing to be on thyroid medicine and for a time he had diabetes insipidus but that eventually took care of itself.

By the age of 5, he was weaned off all medication and started kindergarten.  For ten years Jacob was seizure free.  The only thing we dealt with was precocious puberty.  At the age of eight I administered Lupron for five years.  I stopped giving him Lupron just two months before his thirteenth birthday.  Then the unthinkable happened, he had a grand mal while sleeping.  He had an MRI done but nothing was found.  So, we didn’t do anything until nearly a year to the date he had another grand mal within an hour of going to sleep.  We went to Lucille Packard Children’s Hospital in Palo Alto, California.  He was put on Oxcarbazepene.  He was doing well with the meds so we started to relax some.  Then another storm of grand mals came, all at night within an hour of sleep.  He had them two months apart then just five days apart.  Talk about chaos!  Finally, we seemed to get a good dosage of meds and we were able to get his seizures down to just once a year.

Then in 2015 at the age of 17 he had a grand mal at school and then another one at home just hours later.  A double whammy!  We were heartbroken because we felt safe with him having seizures at home in bed when we were there to help him and now this safety net was taken away from us.  The neurologist added half a pill more to his daily regimen.  He was able to finish out his senior year without any more seizures.

Currently, he has had a new type of seizure where he was conscious during all of it.  So, we go back to the drawing board and try to figure out how to support Jacob as he begins junior college.  HH is unpredictable but one thing I know for sure, we will always fight for him as I am sure all of you do daily for your child.

Living with HH and Planning a Family
December 7, 2016