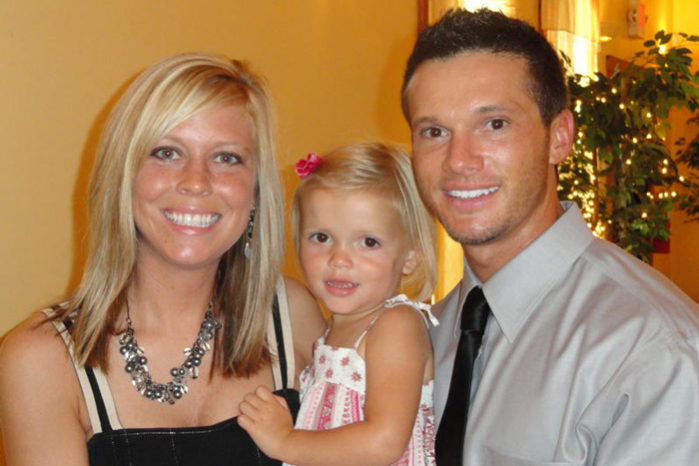 Jadyn was born on September 6, 2007. We counted all her little fingers and toes to make sure she was a typical healthy new born. Things were excellent, the pregnancy very standard with no complication. Jadyn was our first child so we had a lot to learn and until 6 months life was normal for our new family.

We noticed something abnormal with Jadyn. She would have laugh/cry episodes at unusual times. Even her eyes seemed to be unfocused on anything or respond. These “episodes” were happening approximately six times daily lasting about five seconds. During her regular checkups we brought this up to the pediatrician but weren’t taken critically. At every checkup we hoped that she would have an episode, however they happened so irregularly it was impossible. We had no reason not to believe the pediatrician due to her seeing hundreds children compared to us. We even asked our parents but they, like us, were very unsure and maybe too afraid to know the truth.

For two more years we kept hoping she would either grow out of it or be old enough to tell us what she was feeling. However, her action during and after these episodes led us to feel uncomfortable each time they occurred. She often said, “I’m scared” afterwards or wanted her blanket. More noticeable, but only five seconds long, other family members started to notice. Wishing she would be able to communicate what she was feeling, but because she is so young, it never happened.

One Sunday afternoon, she had an extraordinarily long episode for about 45 seconds. Her eyes were off to the side, her legs began to wobble, and loose balance with slight moaning. Even in frenzy we video recorded hoping this would be helpful. This was a sign; in our hearts something was wrong and we had to get a second opinion. We took her to the emergency room at our hospital in Ohio. Only explanation to the front desk we could come up with was a weird seizure of some sort and that we had a video to show the doctors. The immediate EEG test was followed by MRI testing. Little did we know this process would take three long, strenuous days waiting in that small room.

Doctor returned and diagnosed her with a rare benign tumor causing gelastic seizures, Hypothalamic Hamartoma (HH), our hearts dropped and questions filled our minds. In this difficult situation we found a way to be thankful for having options. First option was to try seizure medications and if it doesn’t work then perhaps surgery. Her condition was so rare that only the Phoenix, AZ hospital performs the surgery in the United States. We were very stressed, worried about medication side effects and if things would be all right. Even though the doctors said we did a good job finding it very early, still felt like we could have done something sooner. We were wondering about our employers’ thoughts about missing more work and about consistent doctor’s visits. We knew no matter what we were going to put Jadyn first.

Her prescription read to only to take a tiny dose of the drug twice a day. There were many types of seizure medications, few with dangerous side effects, but only educated guesses about which would help. Here we felt like our daughter was a lab test mouse and wanted to know more about the surgery procedure. Doctor suggested medication over surgery in this case. Luckily the medication started out working, no seizures for a week, our stress decreased, and things seemed to get better. Every day we researched HH stories and continued to monitor for any signs of seizures. Findings were precocious puberty, behavior problems, and seizures tend to increase as time goes on. Over 17 days Jadyn seemed to be the exception, but seizures came back. We immediately called the doctor and were told to increase the dosage of the medication; without change. We tried two pair it with a different drug and it failed next to all other medications over the following three months. Surgery looked like our only hope.

Doctors at Ohio’s were very familiar with the Phoenix, AZ institute and suggested a visit. We contacted the institute coordinator to make a schedule, which included two days of consultation, then surgery and recovery, totaling two weeks. They insisted that if things go as planned Jadyn would be almost 100% one day after surgery.

With all the plans set we took off. When we arrived in Phoenix we were greeted sincerely. After hearing all the possible consequences of surgery such as diabetes insipidus (DI), hypothalamic obesity, and temperature instability they somehow made us feel like this was the right decision. Along with the Grandparents we made the decision to go forward. Her surgery was scheduled four days before her 3rd birthday on 9/2/10. That day our stress levels were at a new high. The procedure was to take six hours, including a pre-MRI, two hours surgery, and a post-MRI. During this time we prayed for everything to be okay and for Jadyn to be seizure free forever. Good news came as the smiling doctor walked out – everything went well and the tumor was completely removed. A sigh of relief filled the room.

As the doctor had promised the recovery was remarkably fast. She was talking and moving two hours after surgery. The next day she was able to walk around and most importantly, showed no signs of seizures. On the third day she was released to continue with any normal activity. Jadyn’s had no seizures since but we still continued to monitor her for any signs of HH. She has to continue taking the to us now familiar, drug for a full year to help “untrain” the brain.

My family would like to thank everyone at the both institutions for giving Jadyn a typical life. We found out it’s not always just about counting fingers and toes. Our advice is to trust your instincts as a parent. Collect as much information as you can to assist the doctors. A second professional opinion may be required due to the rarity of HH.