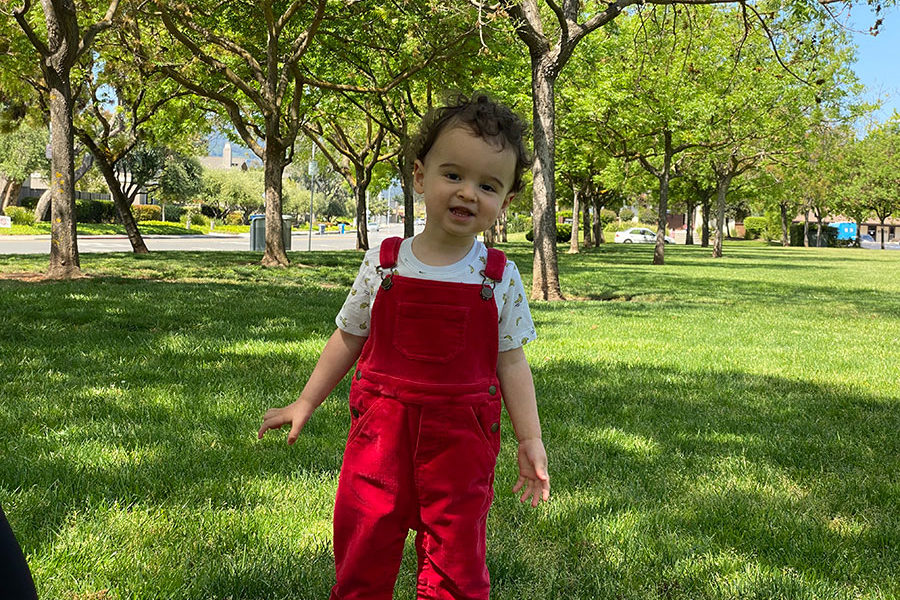 Meet Lou – A Story of Hope

Lou’s story, like many others on this site, begins with a series of misdiagnoses. When he was an infant he was making an odd sound — a  repetitive ‘ho-ho’ that wasn’t very laughter-like. Our baby would make noises every 15 minutes, waking himself up and because of this he was always tired and had trouble sleeping.

We brought up this sound to his pediatrician several times, and also visited sleep specialists, behaviorists, and even a neurologist. Our son would make this sound in front of them, and they all told us to ignore it and that he would outgrow it. We kept looking for answers for more than two years, and at some point started believing that perhaps we were indeed exaggerating first-time parents, and needed to relax a little. Whenever our baby would make this noise in front of others we were often asked “is he crying or is he laughing?”.  Unfortunately, we didn’t pick up on that clue that would’ve allowed us to diagnose him earlier.

When Lou was 2 years old, and we were already into the COVID-19 pandemic, the noise started to sound more like a hollow laugh and his face would contort into a smile. He also began having body tremors and other symptoms that made us realize he was having seizures. On Mother’s Day weekend and following our gut, we went online and started going through a list of all types of seizures, and finally found gelastic seizures. Lou’s behavior ticked every box for a Hypothalamic Hamartoma. We had diagnosed our son!

Taking in consideration that our state was under lockdown for the pandemic,  we knew we would be challenged to meet an expert in person, so we created a public folder in Dropbox where we hosted videos of Lou’s episodes along with a description of everything we were seeing and how often they were occurring.

HopeForHH.org provided us a very comprehensive list of Treatment Facilities.  We found the one that was closest to us and asked our pediatrician on Monday morning for an urgent referral. We got an appointment for an EEG on a Tuesday, and a zoom appointment with a neurologist the following day. We made sure to share the Dropbox link with them before the appointment. As soon as our meeting began, we were told they were able to diagnose our son from the videos alone and started him on anti-seizure medication. An MRI was scheduled ten days later, and we were told we would most likely find a Hypothalamic Hamartoma.

While we were waiting, we might have read all the information there is about  HH online. We learned that medications would most likely not help our son, and started considering surgery for our son.

After the MRI, we received a call on the way back home confirming a grape-sized HH connected on the left side. Hearing the diagnoses brought mixed feelings: we finally knew what was going on, but deep down we never expected it to be a brain tumor. It was the hardest phone call we have ever received, but as soon as everything was confirmed we were already looking into hospitals for surgery, and we knew we had to move quickly, so we got busy.

We requested the images to be shared with a few hospitals, filled the paperwork, and waited for the hospitals to have their conferences and consider our case. Unfortunately, at this time, our son’s condition was starting to worsen rapidly. Once a very playful, talkative child, Lou was now struggling to remember words and was becoming unable to perform tasks he was able to do before. His cognitive and fine motor skills were deteriorating day after day in front of us. At some point he completely stopped speaking, playing with toys, lost interest in books, and only wanted to lie down and watch cartoons.

Diana LaRocque from Phoenix Children’s Hospital, one of the many hospitals we contacted, called us after their conference and offered a surgery date in three weeks’ time. Diana was very patient and helped us gain a better understanding of the whole process. She was truly fantastic to work with.  Diana arranged a zoom call with Dr. Adelson, who kindly explained that we needed to act as quickly as possible. He helped us understand that a child’s neurons are made for learning, and when there is a hypothalamic hamartoma in the brain these neurons sometimes learn to seize instead of gaining another skill. We needed to move quickly.

Knowing we needed to avoid exposure to COVID-19 at all cost since it could delay the surgery, we packed groceries for two weeks and drove 13 hours to Phoenix, stopping along the way to give Lou his dose of steroids in preparation for the surgery. Unfortunately due to the pandemic, we were unable to bring any family members with us for support.

While stationed in Phoenix we had a zoom call with Dr. Wilfong before the surgery, and he explained the process to us: the Phoenix Children’s Hospital has a new robot that is being used for laser ablation surgeries that increases precision, which when combined with their state-of-the-art readings of the resting-state fMRI, has resulted in better outcomes for HH patients recently.  Hearing these words helped calm our nerves before the surgery.

On the day of the surgery we arrived early to the hospital. Only one parent was allowed to go in with Lou, due to hospital restrictions during the pandemic.  Mom went in with him and met Dr. Adelson and Dr. Wilfong. They both felt confident about the surgery after seeing the data from the resting-state fMRI.  The surgery lasted about 4 hours, and we found him tired and cranky but mostly unaware of what had happened. That day we saw what we call a  “micro seizure”, in which his face froze into a smile for a few seconds and then went back to normal. Dr. Wilfong and Dr. Adelson told us we might see some seizures for a few months while the network is shutting off.

The steroids made Lou gain some weight and put him in a terrible mood, but otherwise, he had a good recovery. We went back to our Airbnb the day after the surgery and allowed him to sleep in and eat as much as he wanted. We thought he’d want to keep watching cartoons since it was the only thing he wanted to do before the surgery, but he surprised us by picking up some toys and starting to play again. At that point, we knew that things would be different from that point on. We had started a new chapter in our lives.

We drove back home, and Lou was happy to be back in his bed. The following  days after our return we started seeing an explosion in vocabulary: Lou was  not only speaking again, but using new words every day. He also started  coloring (which he had never been interested in doing before), putting  together puzzles, and regained interest in books. He was also very tired and  took very long naps. We joked he was catching up with all the sleep he hadn’t  been able to have in the past two years. We love watching him sleep without  interruptions, and still pinch ourselves every day to make sure we aren’t  dreaming.

We haven’t been able to have Lou properly evaluated due to the pandemic,  but while we believe he is somewhat delayed, we also believe he will be able to catch up soon. One thing we had never seen before the surgery was tantrums. We think Lou was too tired to have tantrums in the past. We like to believe what we are seeing are healthy tantrums and this is part of the process of catching up to do normal toddler things.

We will return to Phoenix in a few months to repeat some tests, and see how things are after the surgery. In the meantime, we are enjoying every day with  Lou, singing songs, dancing, playing with toys, coloring, and walking around the neighborhood. Every now and then he makes a sound that makes our hearts stop for a second until we realize he’s actually laughing while watching cartoons and not because he’s having a seizure.

We find it hard to believe that after two years and a half chasing the reason for our son’s strange noises, we were able to finally diagnose it and treat it in a couple of months. We understand that every HH is different in their own way and symptoms, and so are the outcomes and complications after such a critical surgery. We are thankful there is new technology nowadays that can help children like ours have a better outcome, and hope that sharing our story can help bring hope to other parents too.

Living with HH and Planning a Family
September 9, 2020