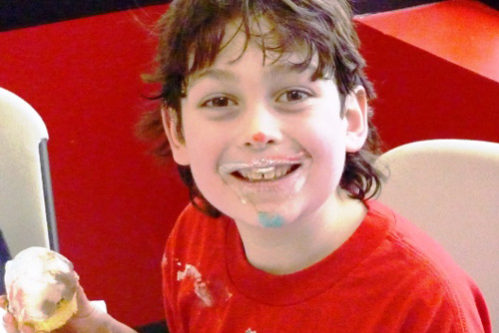 For most 8 year old boys, giggling is an expression of joy! For our son, Mark, episodes of uncontrollable laughter are a rare type of seizure. As a toddler, Mark was quick to smile and laughed often. He seemed happy, but my husband, Craig, and I had a feeling something was amiss. Mark often made swallowing motions and had frequent, but brief moments where he “spaced out.” Our pediatrician diagnosed him with reflux and assured us he was fine. As first time parents, we assumed we were being overly sensitive. However, when Mark’s preschool teacher validated our concerns, we began a series of medical screenings. Test after test came back normal increasing our anxiety that something was being missed and further isolating us from our friends – we could see Mark was “different” from his peers – why wasn’t it obvious to anyone else?

One day Mark and Craig went ice skating. Mark had been ice skating proficiently since he was 2 and loved to hit a puck around on the ice with his dad. Mid-skate stroke, Mark froze. After a minute, he tried to skate but kept falling down and could not stay upright. Suddenly, Craig, an orthopedic surgeon, realized that Mark was experiencing the disorienting state that follows a seizure. A neurologist diagnosed Mark with epilepsy and an MRI was scheduled to rule out the “bad stuff.”

Mark had the MRI just before his 5th birthday. At first, the radiologist reported Mark’s MRI appeared normal. However, after we conveyed the strange “staring spells” and “unusual giggling” episodes Mark experienced, the radiologist reviewed the MRI again. He concluded that Mark had a very small hypothalamic hamartoma (HH) – a rare tumor on his hypothalamus. The giggling was a “gelastic” seizure.

You can imagine the fear we felt when we were told Mark had a brain tumor. A hypothalamic hamartoma is 1 in a 200,000 diagnosis and most radiologists would have missed it. We found some information on an international online support group and suddenly Mark’s peculiar symptoms began to make sense. However, the information created new anxiety because many children diagnosed with HH are severely handicapped due to frequent seizures and are physically, cognitively, and behaviorally challenged. Is this what was in store for Mark and our family?

Mark’s symptoms worsened and he began having daily gelastic, absence, complex partial, and grand mal seizures. We tried antiepileptic drugs even though gelastic seizures do not respond to medicine. We sent Mark’s records to over 20 neurosurgeons worldwide hoping for guidance. Some doctors declared Mark did not have a HH; others were convinced he did. Some thought we needed surgery; others advised we should “watch and wait.” The diversity of medical advice from top neurosurgeons was overwhelming. We felt scared for Mark as we realized all of the ways this condition would impact him, as well as alone in trying to make the best decisions for our son.

At age 5 ½, Mark underwent Gamma Knife Surgery (GKS) (radiation targeted at the tumor with the goal of killing it to make the seizures cease) which at the time was considered “experimental.” Since Mark was high functioning and his seizures were fewer than most HH children, he was deemed a good candidate for this procedure which could take up to 3+ years to determine whether or not it was effective.

In the three years since Mark’s surgery, he has become a gifted artist and continues to play sports with his neighborhood friends. While he is experiencing fewer gelastic and absence seizures, he is not cured. He has significant memory deficits and processes information more slowly than his peers. His 2 ½ year younger brother has surpassed Mark’s ability to read and he attends a school for children with learning disabilities. He struggles with many educational, emotional, and social side effects. It is heart wrenching to watch your child laugh against his will and then deliberately try to cover it up as if someone had just told a joke.

One of Mark’s neurologists put it best – he is a minority (epilepsy diagnosis) – within a minority (HH diagnosis) – within a minority (high functioning compared to other HH kids). We have been forewarned that the effects of HH worsen as children age. Consequently, we are now confronted with the difficult decision of whether to continue to watch and wait, repeat GKS, or try endoscopic surgery that would involve going deep into Mark’s brain. If surgery is successful, Mark could be seizure and symptom free. But if anything goes wrong, we risk irreparable harm to our high functioning, happy-go-lucky son. This is an impossible decision – with surgery, we might cure our son of this condition for life or leave him far worse. How do you choose?

As a surgeon and former non-profit executive, we felt a strong calling to use our resources and experiences to help others. In early 2010, we joined with 3 other families and founded a 501c3 nonprofit foundation – Hope for Hypothalamic Hamartomas (www.hopeforhh.org) – whose mission is to provide information and support to HH patients and to promote much needed research into this condition. We fear that many HH kids are misdiagnosed like Mark or are treated for psychiatric problems (given the peculiar seizures). Even kids who have been correctly diagnosed with HH often end up having parts of their brain removed that should have been left intact because of misunderstanding of the condition.

Research is key to figuring out how to prevent and cure this devastating condition so HH kids can laugh from joy and not against their will.