When Kate was born in August of 2014, in Fargo, ND, the nurses immediately commented on how ‘vocal’ she was. We were a sleepless family, as she would always wake in the night, making her ‘crying noise.’ She often had episodes throughout the week, where it would last the entire night. I can recall her longest “episode” lasting 21 hours. In passing at the grocery store, people heard this noise and said, “Such a happy baby!” However, if they could see her face, it was obvious she wasn’t happy. We often had her to the doctor for reoccurring urinary tract infections, reflux, and regularly scheduled appointments. When we would point out her noise, the doctor said, “She’s a fussy baby.” or “She likely has colic.” What did I know? I was just a clueless first-time mom… Kate never slept a single night, or through a nap, making this sound over 100 times a day.

After many trips to the doctor for urinary tract infections since the age of 2 months, an alarm finally went off for a walk-in doctor when Kate was 11 months old. We were immediately sent to endocrinology, and this was the youngest case of precocious puberty they had seen. An MRI found a 1-inch Hypothalamic Hamartoma. After an EEG, and Video EEG, the neurologist sent us home, as he “saw nothing.” At this point, we were done listening to people telling us this noise was “nothing.” After spending 2 minutes with a Neurologist at the Mayo Clinic, who was familiar with gelastic seizures, Kate was immediately diagnosed, and put on Keppra.

As the Keppra was no help, we got Kate’s records sent to Phoenix Children’s Hospital. After her final appointment in February 2016, her Transcallosal Craniotomy was set for April 12th, 2016. The doctors prepared us for a partial resection, and she’d likely need a laser ablation at some point in the future. We buckled our seatbelts. We were willing to do whatever necessary, to provide Kate with a better quality of life.

I held Kate as she had her final seizure, while they put the mask on her face before surgery. During Kate’s surgery, we were lucky enough to have the company of Lisa Soeby from Hope for HH. She was a welcomed distraction and her positivity was an example for us all. After waiting an entire day, Dr. Ruth Bristol pulled us aside and told us she got it all! That night, Kate had the first complete night of sleep in her life. In that moment, I knew that the surgery was worth the risk. Even if that single night of sleep was the only benefit Kate would get, it was worth it.

Kate spent 2 weeks in the PICU, as she was struggling with Diabetes Insipidus. We were well prepared for the possibility of DI, and knew that trading the HH for DI was more than fair. After 1 month, and more bodily fluids than one can count, we were discharged. On Mother’s Day. The best Mother’s Day gift I’ll ever receive.

About 10 months after Kate’s surgery, we headed back to Phoenix for follow-up appointments. We had been working closely with Kate’s endocrinologist in Fargo to adjust her medication for her DI, but we had suspicions that it had resolved. We decided to challenge the Endocrinologist in Phoenix. He told us what we’ve always been told; DI does not go away, and Kate would have it forever. I looked him in the eye and animatedly said, “Well, 2 month old babies aren’t supposed to get their period either.” He smiled, and listened to what I had to say. We went home after the appointment and didn’t give her any medication. We traveled to the lab many times over the next several days, watched for symptoms, and kept in close contact with the doctor. Once again, Kate is writing her own book, and somehow her DI had resolved. Since then, she has been MEDICATION FREE. I’m pretty sure God decided to do us a solid, since I was about a month pregnant at that point.

What a journey we’ve been on. 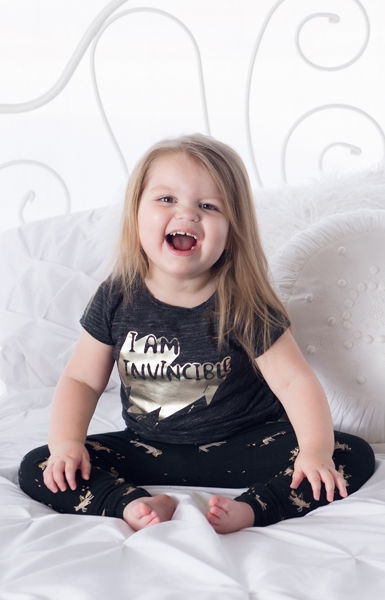 As with many that have a surgery involving the hypothalamus, Kate has Hypothalamic Obesity. We remain constant in providing her with a very clean and portioned diet. She can eat a healthy filling meal and even 30 minutes later, she still feels ravenous hunger. A lot of our day is spent keeping her occupied, so she isn’t constantly requesting to eat. You can frequently find Cale and I hiding somewhere in the house to sneak a little snack for ourselves. I like to escape into the laundry room for my snacks, and Cale has taken a liking to the mudroom closet. I’d be lying if I said I didn’t find a bag of Tostitos in the shoe rack last week.

Kate’s progress goes through peaks and valleys. We celebrate the peaks, and continue the celebration through the valleys. Kate has a lot of emotions and frustration. It’s almost as though she knows what she wants/needs to do/say, but her brain isn’t always sending her voice/body the message, and she gets frustrated. But, with a lot of repetition and patience for various activities, we have seen a lot of those reactions become shorter. For example, she can now stand at a sink and wash her hands with assistance, and almost no tears! It took many months to get there, but we got there! Some of the behaviors have even disappeared, and others have likely just morphed into typical sassy 4-year-old behaviors. We’ll take it! Perspective is a beautiful thing
Over the past year, her speech has progressed greatly, especially within the last few months. Even before the words started to come, she certainly found ways to communicate in her own ‘spicy’ little ways. I finally got to hear her say, “Mom,” without prompting last year and let me tell you… she uses in A LOT. She used to seize 100 times a day, and now she yells for me 100 times a day. Again, perspective is a beautiful thing.

She continues with speech therapy twice a week, occupational therapy twice a week, behavioral therapy once a week, and physical therapy once a week. She has the most incredible (and very patient) therapists. She just began her second year in the Early Childhood Special Education program, and rides the bus to and from school four mornings a week. She also receives speech, OT, and PT while at school. Over a year ago, we decided she could use a regular activity just for FUN, so she started weekly gymnastics sessions.

I could share a million more things, but I’ll put it all in the memoir I’ll someday write about this crazy journey. Kate’s personality RADIATES happiness, hope, and an entertaining dose of sass, wherever she goes. She has gifted us so much perspective, and inspiration to share our story and help others.

And to answer the #1 question I get about Kate: Today, she is still seizure free! God is good!