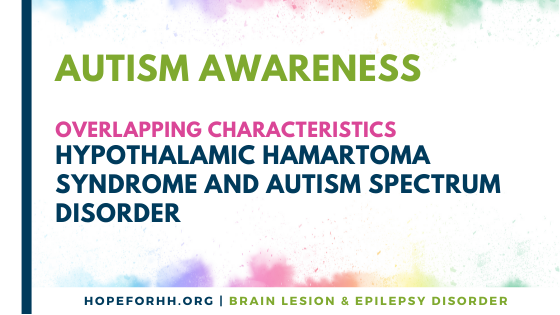 When considering if an individual has an Autism Spectrum Disorder (ASD) in addition to HH, there may be some (or a lot of) overlap, and it is very possible to have both of these conditions. The art of diagnosing ASD comes from a trained professional that is able to speak to the nuance of a skill or skill deficit.  With ASD, there will often be a particular unusual quality that exists with some of the skills and characteristics.  So for example, when assessing an ‘inattentive’ child, the question may be, “Is this child inattentive because they can’t focus on the task at hand?”; “Is this child inattentive because they are persistent in completing a preferred activity that they already started?”; “Is this child inattentive because they are avoiding the demand and/or the social interaction?” All of these assessments of ‘inattentive’ behavior can look the same to the untrained eye, but this example explains that there are very different reasons that a behavior may exist. The trained eye will be able to pick up on subtle clues to assist in painting a full comprehensive picture of an individual and whether or not the individual meets all of the criteria for an autism spectrum disorder.

With such a spectrum of comorbidities that present in a diagnosis of HH, it is very possible that an individual demonstrates some but not all characteristics of autism. Autism has a high prevalence rate at 1 in 44 children in the U.S., with boys being four times more likely to be diagnosed, according to the CDC.  Autism is also linked to an 80% heredity rate and highly linked to the same genes responsible for epilepsy.  That explains why many times people with epilepsy have autism and vice versa.  One diagnosis does not cause the other, however, more recent research is demonstrating similar genetic markers (Besog, 2015). Approximately one-fourth of individuals with ASD have epilepsy as a comorbidity (Sharma, 2021).

When symptoms and characteristics of different conditions overlap and muddy the water, individuals are often left isolated and dismissed by professionals. Being able to determine the cause of a behavior has a great impact on the treatment plan. With the example given above for inattentive behavior, a person having difficulty focusing on a task may need time limit accommodations.  A person having difficulty transitioning to a new task until the preferred task is complete, may need an accommodation to alter their daily schedule to complete their preferred tasks.  For the person inattentive because of social challenges, there may be accommodations for the delivery of the demand from the person requesting.  If the cause of the symptom or characteristic is not understood, then the individual is left with an inaccurate treatment plan, or lack of.

This is especially so in the HH community when an individual is demonstrating socially disconnected laughing behavior and the particular individual has a dual diagnosis of ASD, or suspected ASD characteristics.  Socially disconnected laughing may be seen with individuals with ASD as the individual may be caught in thoughts of ‘scripting,’ or repeating to themselves or out loud something that they have previously heard from someone or television, for example.  Sometimes, if the individual with ASD is young, without spoken language, or intellectually disabled additional information can not be gathered with regard to their laughter.  Similarly so, an individual with HH may laugh in an unusual way and a caregiver cannot gather further information about the laughing.  How does one determine if the laugh is a harmless laugh or a potentially devastating seizure?

If you are new to the HH community, nearly half of the individuals diagnosed with an HH have gelastic laughing seizures.  A gelastic laughing seizure originates from the hypothalamus in the center of the brain, trains the brain to engage in more debilitating seizures, and the gelastic seizures do not typically respond to medication.  To further complicate the condition even more, often times, gelastic seizures do not typically register on EEGs, even prolonged EEGs. The frontline treatment plan for these seizures is brain surgery to treat the HH, which is a heavy consideration for ‘suspected’ seizures. This is vastly different from ASD laughter, which may only require an accommodation. Yet, caregivers of an individual with both HH and ASD are left to wonder if their loved one is suffering in laughter.

Read our previous blog from our Autism Awareness Series

Differential Diagnosis for those with Hypothalamic Hamartoma Syndrome and autistic characteristics
April 8, 2022