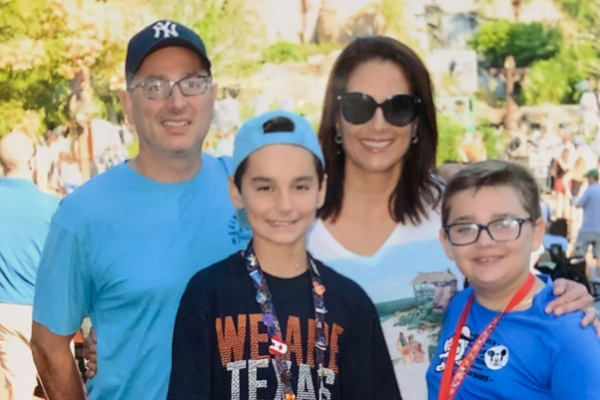 We first introduced JoJo after his surgeries in 2011 when he was 19 months old.  He had a full removal of his large Type 4 Hypothalamic Hamartoma (HH) after two surgeries, a craniotomy to remove 90% of the HH and then endoscopic to remove the remaining 10%.  JoJo used to have 100 gelastic seizures a day.  He also had precocious puberty.  JoJo is now 9 years old and in 3rd grade.  We wanted to provide an update as to how JoJo has been doing since his surgery and to also let others know things we have learned along the way.

First, it was thought that removing the HH would fix precocious puberty.  It did not in JoJo’s case.  JoJo used to get monthly injections of Lupron to control his precocious puberty.  Once he turned 2 years old, we were able to move him to the Supprelin implant and stop the monthly Lupron injections.  He is still on the Supprelin implant and to date, we have never had any side effects.

Second, JoJo also has advanced bone age from the HH.  At 9 years old, his bone age is that of a 13.9-year-old.  From his Endocrinologist, we are told this will cause stunted growth since his growth plates will close prematurely.  The Endocrinologist recommended, and we have put him on daily injections of growth hormones to allow him to grow as much as possible before his growth plates close prematurely.  He is also taking medication in the form of a pill daily to try to slow the closure of the growth plates also.  He is doing well on both medications and has grown over 5 inches to date using these medications.

Third, JoJo also has Hypothalamic Obesity.  He is a very active boy and yet really struggles with weight gain.  He does not seem to have any metabolism.  He is about 5’2” and 147 pounds.

Fourth, regarding gelastic seizures, JoJo has never had another one since the removal of the HH.  We constantly watch for this event and pray every day.

Fifth, prior to the removal of his HH, JoJo had been falling behind meeting developmental milestones.  After the removal of HH, JoJo thrived and hit every developmental milestone.  He became advanced in his verbal speech and ability to communicate with people.  He did well in Kindergarten, First and Second grade.  He started to struggle academically in 3rd grade with reading comprehension and math.  In addition, he has issues remembering what he learned as well as following multi-step instructions.  It was determined through school provided testing that he has low working memory and he is easily distracted.

Sixth, his 3rd grade academic struggles along with the school testing results prompted us to meet with a Neurologist to see about getting JoJo scheduled for Neuropsychological, Learning and Auditory Processing evaluations.  The Neurologist also asked us to get an EEG and an MRI just to see how JoJo’s brain was functioning.  He was surprised to hear that we had not done these tests since the removal of the HH.  We were never told that we had to get these tests again after the removal.

Seventh, we were surprised to find that JoJo’s EEG was abnormal even though he is not having any seizures.  In consulting with Barrow Neurological Institute at Phoenix Children’s Hospital, the doctor said JoJo’s EEG is normal with most other HH patients.  The MRI showed all the signs of surgeries that have been done, but it is hard to tell if anything has changed since we did not have a baseline MRI to compare the two outcomes.

In closing, I would advise getting an EEG and an MRI after all surgeries, so that you have a baseline to compare.  We were told that JoJo was all fixed after the removal of the HH and that we would just have to deal with endocrinology issues.  That is just not true.  We are just now at the beginning of trying to determine what processing issues JoJo is having, so that we can put the best plan in place to help him with learning as well as understanding where he struggles in comprehending daily.  We are also frustrated for no easy answers or fixes to the endocrinology, weight, learning and processing issues.  With the above said, JoJo is an extremely happy, positive, kind, well-liked and awesome kid.  We are blessed to have him as our son and are very positive about his future.