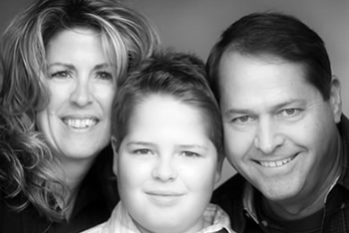 “Pushy Parents” that is what Edie Magnus the correspondent from Dateline NBC, called my husband and I. It is a title we have come to acknowledge with pride. Edie was interviewing one of the many doctors who believed there were no options left for our four-year-old son CJ. He was born with a rare brain tumor called a Hypothalamic Hamartoma (HH). When CJ was three months old, we learned that the growth deep at the base of his brain was benign. That was our gift from God. No chemotherapy, no radiation, no spreading throughout the body. However, there was bad news. CJ would have a life filled with uncontrollable seizures of multiple types, cognitive decline, precocious puberty, and rage behaviors. As parents, we were devastated. But we also believed, deep in our hearts, that we couldn’t accept that diagnosis without a fight.

CJ was born at Incirlik Air Base in Turkey. My husband, an Air Force Lt Colonel, was assigned to support NATO. As Jon was cutting the umbilical cord, CJ stared making a grunting noise, and the doctor commented “What do you know, I’ve never had one try to talk this early before”. He didn’t assume anything was wrong, just something new. But Jon and I both looked at each other and thought sometimes new isn’t good! We had no idea how right we were! Over the next several days, we noticed these episodes of grunting occurred around the clock with incredible regularity. In fact, it was every 15 minutes. Over the next 3 months, we went to three doctors and each one told us we were just nervous parents and CJ probably had colic. Finally, one doctor told me he would send CJ and I to an American hospital in Germany for tests. In Germany, the doctors ran several tests and it was an MRI that finally revealed the tumor. The doctor called us in his office and said, “See that big lump right there in the middle of CJ’s brain, that shouldn’t be there. By the way, the chaplain’s in the hall, if you’d like to talk to him. He’d like to talk to you”. We were flown to the States the next morning to Walter Reed Army Medical Center – one of the top US medical facilities. There they did exploratory brain surgery and the diagnosis was made. We were told there was nothing that could be done for CJ and we would just have to go home and live with it. At this point, CJ was having between 100-300 seizures a day. As a mother, watching what was happening to my son was tearing me apart.

After about 10 days, we left Walter Reed destined for Phoenix, Arizona to be near Barrow Neurological Institute (BNI), part of St Josephs Hospital. It was a premier neurological center in the US, and we wanted to be near a facility that may someday hold an answer for our son. For the next 3 years, we searched medical libraries, consulted doctors and turned to the Internet for information. Unfortunately, because HH was so rare, information was sketchy at best. One day, while searching every corner of the Internet, we came across emails from a couple of families who had children with the same diagnosis. It was our light in the darkness. We never imagined we would find parents who understood exactly what we were going through. We no longer felt isolated and alone. Our prayers were finally being heard. One family from Australia indicated in an email that their daughter was going to be operated on by a neurosurgeon in Melbourne. He had been working on cadavers for 6 months to try to go deep in the brain to remove the tumor without damaging critical structures in the process. Her surgery was hugely successful. Her last seizure was the one right before surgery and she had no complications. We were overjoyed for the family! Immediately, we approached the doctors at Barrow and asked if they would perform this same operation here for CJ. Unfortunately, the US doctors didn’t share our confidence in the approach. They believed it was too risky and they were not willing to do it until it was proven in the US. At that point, we knew we had to go to Australia.

Meanwhile, a producer from Dateline NBC heard about families from all over the world going to Melbourne for this incredible surgery and he wanted to tell the story of an American family. A Dateline crew from New York followed us to Australia and captured the incredible story as it unfolded in Melbourne. CJ’s four-hour surgery was a complete success. He was seizure-free with no complications. We were truly blessed! Dateline continued to film CJ’s recovery and in the spring of 2003, “CJ’s Story” aired. When we returned from Australia, my husband and I met again with the doctors at Barrow, and pressed them to reconsider their decision. After seeing CJ, they believed this was a surgical approach worth pursuing. Six months later, our surgeon from Melbourne came to Barrow to demonstrate the technique on six children. All six patients were children from our online support group that had grown to over 100 families from all over the world. Neurosurgery here in Phoenix took one giant step forward that day.

I am now the HH Patient Liaison for Barrow. I support families coming to Phoenix for surgery by fundraising, answering questions, and offering a perspective only a mother who has been through the procedure can offer. Barrow has embraced the treatment of this rare disorder by assembling a highly skilled team of doctors dedicated to advancing treatment, surgery and research. As of today, BNI has successfully treated over 150 patients from around the world. Best of all, families now have hope and options they never had before.

CJ was seizure free for almost 3 years. At age 8, the seizures returned. But that isn’t the end of our story. CJ was a candidate for surgery at Barrow to remove the last bit of tumor that remained. It would not have been possible if the doctors at Barrow had not embraced the approach and taken it to the next level with high tech surgical equipment available today. The surgery was a success however, 2 small slivers remained. CJ had a 4th and final HH surgery in May of 2011. Today, CJ still has the occasional gelastic seizure but all visible HH is gone. He does have challenges with his thyroid, short term memory and weight. He loves photography, high school, sports and reading. He hopes to one day take photos for National Geographic!

HH is not as rare as once thought, just misdiagnosed. Educating pediatricians and neurologists to recognize the symptoms and give a correct diagnosis is key. My goal as a mother is to do everything I can to educate the world about this disorder. It is important to encourage parents to be involved and not afraid to challenge the medical community. You have to be your child’s best advocate. Trust your instincts and join the proud ranks of “Pushy Parents.”