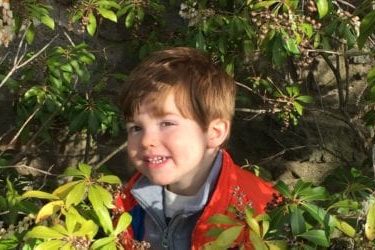 Our little Jack was born on April 11, 2014, and came home from Hoboken Hospital with me the next evening to spend his first Saturday night meeting his big sister, Julia, who was almost two.  He was perfectly ordinary and had no issues at all guzzling down his bottles and enjoying the attention.

However, within a few weeks, we noticed that he spit up A LOT, and often arched his back and tilted his head to the side.  Our doctors assumed he had colic, and he was given prescription formula for colic for his whole first year.  We thought the tilting of his head could be muscle tension and mild torticollis, and he received PT from a lovely woman twice a month to help him get strong.

Fast forward until he was a year old and starting regular whole milk, we all saw that the arching of his back was getting worse. It often included his eyes looking up to the side and strange breathing patterns before this happened.  I would videotape these and show them to his pediatrician, who insisted nothing was unusual about this and maybe we should try Zantac for acid reflux or eliminating dairy from his diet.

Being the “pushy parent” as Lisa says, I just knew in my heart that something wasn’t quite right. I felt that the longer I waited to get to the bottom of this, the longer Jack was suffering.  If only he was old enough to just tell me, “Mommy, this is not a milk allergy!”  We switched pediatricians, took him to see a pediatric gastroenterologist, and had an appointment set up with an allergist when everything changed: Jack had his first drop seizure while on the swing in our backyard around 14 months old.  He just slumped over and collapsed.

After an anxious morning in the local ER, we were told that Jack had heat stroke and to keep him hydrated.  So when a very hydrated Jack had the same thing happen again 3 weeks later, we knew something was seriously wrong.  The ER doctors this time FINALLY recognized my videos as signs of a possible neurological problem and we were sent from the local hospital to Children’s Hospital of Philadelphia (CHOP), forty minutes away in Philadelphia.  Once we were at CHOP, Jack had several “episodes” in front of the doctors, and we at last had a confirmation that the milk allergy, the acid reflux, and the heat stroke were incorrect – Jack had epilepsy.

We spend four days at CHOP for monitoring, MRI and video EEGs, and last August we were told Jack had HH.  Of course we were in shock and had never heard of HH before.  We were relieved that the tumor was benign, but terrified at what the future held for our wonderful little boy.  Over the next seven months, Jack tried four anti-seizure medications and stayed on two of them as they lessened the severity of the seizures.  Sometimes his gelastic seizures looked like acid reflux symptoms, but as he got older his daily seizures looked more like smiles and laughs.  I spent my time researching, researching, researching until I found the amazing staff at Barrow.  Finally, we had a group of people who understood Jack’s condition and had ideas on how to help!  Against the advisement of his doctors at home, who strongly felt Jack should wait for surgery another year or more so they could try a ketogenic diet and more invasive brain-mapping, we were off to Barrow.

Our family travelled from the freezing cold of New Hope, PA to Phoenix for two weeks this past March (2016) for a “vacation.” Our vacation included a house filled with both sets of grandparents, my sister, a pool, and many visits to Barrow.  Jack had a laser ablation of his HH on a Friday, spent the night with me at the children’s hospital, and we came home the next morning.

That “vacation” was our miracle trip.  Our son arrived at Barrow having 2-5 gelastic seizures daily and left being seizure-free.  He was suddenly more alert, walking better and more steadily, and was sharper cognitively.  Jack was no longer held back by his seizures and could climb through toy tunnels, chase his sister and play without worry.  We know that Jack’s surgery has been successful, but there are no guarantees. He has a long road of MRIs and monitoring ahead of him.  But the laser ablation has given us tremendous hope for his future, and my husband and I love watching him thrive seizure-free.

My advice to the families reading this and just learning of an HH diagnosis is to never give up being your own advocate.  Do not lose hope because the road ahead may be daunting.  If you aren’t confident in the care you are receiving, keep looking!  My husband and I chose to go against the advice of one of the best epilepsy centers in the country and travel because our gut said they just weren’t familiar enough with HH to make the best decisions for Jack. As a parent, you are your child’s best advocate.