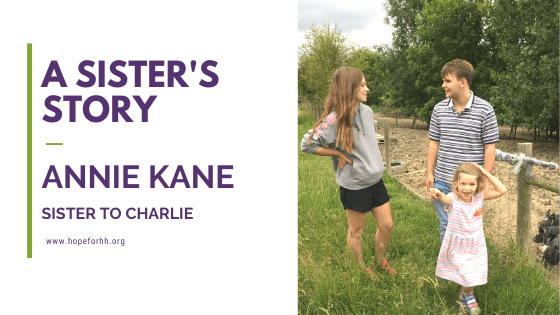 A Sister’s Story by Annie Kane

My name is Annie Kane, I’m 14 and I have two crazy siblings: my brother Charlie and my sister Gigi. Now, why would you refer to your siblings as crazy, Annie? Well, let me start by saying that from my own experience crazy does not mean ‘ludicrous’ or ‘insane’. My definition of crazy would be ‘weird and wonderful’, or perhaps ‘quirky’, maybe ‘convivial’. It’s essential that you, the reader, understand that when I talk of something being ‘crazy’ I’m referring to my definition.

Gigi is 4 years old and is my definition of crazy. According to my parents she looks exactly like I did when I was her age. However, while I was quiet, self-contained, terribly shy but thoughtful, she is loud, expressive, terribly confident and tends to rush into things, rather like ‘a bull at a gate’ (quote from Dad).

Charlie is 16 years old and is also my definition of crazy. When Charlie was born he seemed to be completely normal. As time rolled by and I was born my parents noticed things about Charlie. He did not behave normally. He would scream for no apparent reason, he would run around everywhere we went and often get lost, and his speech was delayed. I of course, newly born, was not aware of any of this. As I started to toddle, my Mum tells me that Charlie and I used to play the ‘push Annie on the floor’ game, which at first I did not find very fun until I discovered the tactics of the game . One day, when I was probably around the age of 18 months, I was happily wandering around minding my own business when Charlie (about three) shoved me over to the floor. Me, quite baffled, picked myself up off the floor and turned to face him. The same thing happened: I was pushed to the floor. After running desperately around our house in London wailing as I attempted to flee from my brother, I had a eureka moment….how could Charlie push me to the floor if I was already sitting down?! I spent a good part of that day sitting on the kitchen floor with my sticker books with a content, but smug grin on my face.

We spent a good part of our childhood in these petty battles: ‘hit Charlie with a stick’, ‘push Annie in the sand-pit’, ‘bite Charlie’s big toe’ ‘there was even a time when I asked Charlie to push me off the trampoline so that he would get into trouble – an advantage of his speech delay was that he couldn’t argue back, although looking back it wasn’t one of my finest moments! Meanwhile Charlie’s signs of his particular craziness were shining through more clearly. When Charlie was 5 he was diagnosed with autism; when he was 7 it was discovered to be caused by a brain tumour called a hypothalamic hamartoma. Either my parents directly told me this when I was 5 or, more probably, I asked why Charlie was at hospital. I knew Charlie had something in his brain called a hamartoma, but I didn’t really know what this was or how serious it was. I knew that it made him different from other boys his age. The other boys didn’t get worried all the time and say things like “you’re not cross with me” and make strange noises, and clap their hands, and flap tissue paper, but this was OK. I regarded my brother in exactly the same way as before I knew about the hamartoma and we did everything the same.

I have memories of our holidays to Marseille where on one day of the holiday we would go and see Professor Régis who would give Charlie an MRI scan and some general feedback. When Charlie was 8 he had his first GKS (gamma knife surgery). Now my first reaction was to sulk, I had not been brought along for this ‘holiday’! It was just mum and Charlie who went so I stayed at home with Dad. Dad told me that Charlie was going to have a big operation on his brain that would remove the Hamartoma, this news brought me great excitement, and finally that stupid thing in Charlie’s brain would go away! Another memory I have is of me and Dad calling Mum from Charlie’s room to find out how he was, I remember asking Dad ‘Will Charlie be normal now?’ and Dad replying ‘No, but he will be a lot better’. Charlie had another GKS 4 years later. Dad was right, I didn’t notice it at first, Charlie seemed exactly the same to me as he did before he left but as the years passed, things faded away. He doesn’t flap tissue paper, he doesn’t laugh without reason, and he hardly ever makes funny noises. These may seem like minor things but really, these are huge achievements for Charlie.

Of course the GKS helped but moving houses from London to Wiltshire had a massive impact on all our lives, in particular for Charlie, the purpose of our move was partly for a change of scenery, but also for taking Charlie to a better school that would foster his needs more. At first This school was great for Charlie, both academically and socially. He was always the top of his class for both reading and writing, which as you can imagine was a huge confidence booster, and he had a few really good friends. Meanwhile, I was settling in at my new school St Francis and I feel as though I really came out of my shell there. We were able to have a big trampoline which Charlie especially loved. And what’s more, Mum and Dad bought us a puppy! You can imagine my delight, when living in London we were constantly told that we couldn’t have a pet because the garden was too small. Well now we had a golden retriever puppy! We named him Raffa, and yes, Raffa is also one crazy dog! The first few years of Wiltshire were brilliant for all of us. Until Charlie began to struggle.

Appleford had always been a school that specialised in helping children who had dyslexia, but let children who had other disabilities in too e.g. Charlie with autism. However within about three years of being there they decided to become a school that focused more on children who just suffered from dyslexia. A lot of Charlies good friends left and unfortunately the other kids weren’t very inclusive with Charlie so he found himself very socially isolated. A few children took advantage of Charlie and got him to do bad things and say rude words to teachers that they knew would get him into trouble. Charlie never complained though and would come home, bounce around on the trampoline, do his homework and spend the rest of the evening on his i-pad. Eventually it became clear that Charlie wasn’t coping there and wasn’t happy. Charlie began his school in September 2016, Rowdeford. 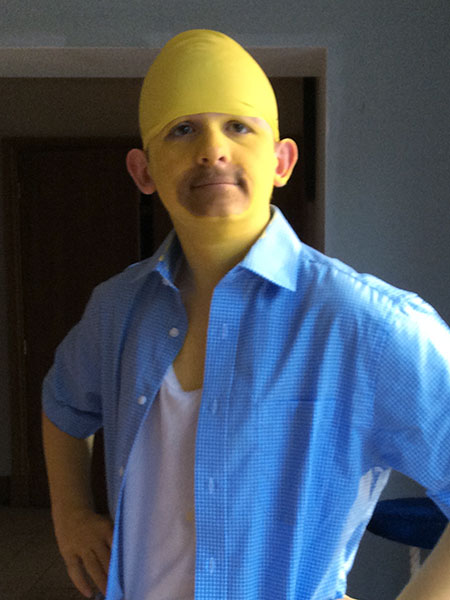 Charlie loves his new school, Rowdeford is a school for children like Charlie who have ‘moderate learning difficulties’. As well as being nervous for Charlie, hoping that he would make some friends, I was also starting boarding school, so Charlie and I were in very similar situations. When I’m at school sometimes when I pick up the phone I hear Charlie telling me how good he is at reading and asking me if I’m proud of him and he tells me that he misses me. Since Charlie started Rowdeford all of us have been trying to develop his reading, last year he read something like 28 books. The type of books he reads are often the short but informative ladybird books. He can tell you all about Nelson Mandela, the gunpowder plot, The Titanic… etc.

Charlie also enjoys working out peoples’ ages! When you first meet Charlie he’ll almost certainly ask you what year you were born in and then tell you your age, he does this not because he’s being rude or cheeky but because this information interests him. He constantly reminds me that I was born in 2003 and that I’m 14, y’know, just in case I forget! Charlie is also forming very funny relationship with Gigi, its rather interesting to watch them bicker over the television, eventually Charlie will give in for Gigi’s demands for ‘My Little Pony’ and will even go and prepare for her a bottle of milk! I sit there and think about what a truly crazy pair they are.

So there you have it. This is a brief summary of my Crazy siblings, in particular my brother. Charlie is in his final year of Rowderford now and seems to be making the most of it. As for the social aspect of school, he has been sent 3 party invitations from people in his year and has even been asked by a girl in his year if he would marry her! (Although this worried Charlie a bit and he told her that ‘its very kind of you but my parents said that I don’t have to get married’) Over the years I’ve been surprised at people’s lack of knowledge, I remember introducing my friends to my brother then later explaining that he had a hamartoma to which they replied ‘does that mean he’s going to die?’ People may think that I’d find this sort of question offensive but I just laugh now at the lack of knowledge that my friends and other people have on brain tumours. Even myself, I’m not going to deny the fact that I still struggle to spell the word hamartoma! So yes, my brother (and sister!) may be crazy, but better to be crazy than dull.