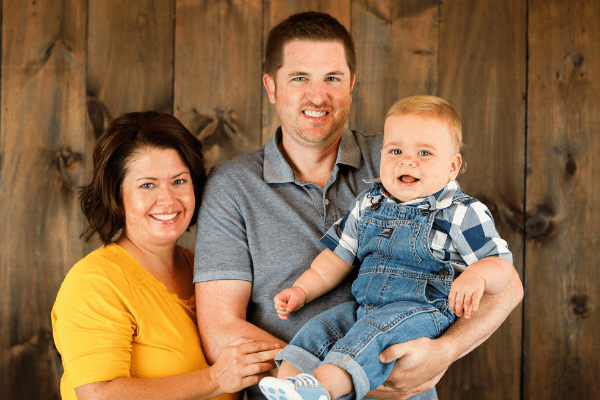 Mark and I married 8 years ago, in our mid-thirties, and wanted nothing more than to be parents.  Our journey to parenthood took the course of unsuccessful infertility treatments, as well as domestic newborn adoption.  Brett was born on Saturday, October 5, 2019, however, we didn’t meet him until 5 days later in the hospital as an emergency adoption placement.  We got the 2 plus year, highly anticipated call, from our social worker at 10 am on Thursday morning, “…a little boy is waiting for you.”  We arrived at the hospital to a perfect baby boy weighing 5 pounds, 7 ounces and 19.5 inches long.  His observation chart above his crib noted gas and grimacing.  By 5 pm that Thursday, Brett had a name, loving parents and was ready to be taken home to be loved and celebrated.

The first six months of Brett’s life was a fairytale dream come true.  I resigned from my 16-year career in special education to be home and had a perfectly beautiful baby boy.  Brett was continually awed by friends and family as a “perfect” baby in terms of his temperament.  He ate well and at 3 months began sleeping through the night.  His hospital report noted above average amounts of gas, so I interpreted all of his grimacing as gas-related.  He especially seemed to make grimaces when he ate.  Family and friends asked, “How does he like the car?” And my response was always, “He loves it!  He immediately giggles!” There were many times when Brett had a grimacing pouting laugh, and I frequently remember deleting all of my videos that contained them because it seemed like he was being fussy.

At Brett’s six month well check, his pediatrician laughed with my husband about Brett’s adorable “linebacker” thick thighs.  I reported to the pediatrician that Brett started purees at 4 months old, however, he never seemed to want to stop eating and would yell for more. We hoped that the start of table food would help curb his appetite, but Brett never appeared to be satisfied and always yelled for more.

At 8 months old, I took notice of Brett’s pubic hair and erections throughout the day.  Brett’s 9 month well check brought forth the first time the pediatrician was concerned about Brett’s growth and development. In 3 months, Brett gained 10 pounds and grew 3 inches.  He went from the 30th percentile at birth to being off the growth charts at 9 months.  The pediatrician’s face clearly showed worry, however, the pediatric endocrinologist that was consulted thought that because Brett’s growth was all symmetrical (head, length, and weight), the pubic hair was likely benign.  Weeks later, Brett began to have body odor under his armpits.

At the beginning of August 2020, we took our first family vacation at a rural beach and I began to feel in my mommy gut that something was off.  Brett was practically 10 months old and could army crawl on his belly, however, he appeared to have a lack of motivation to move and explore his toys.  He tended to be content just lying and looking around at his surroundings.  Brett smiled and responded if someone engaged with him, however, he seemed strangely content remaining in one spot.

Upon returning home from vacation, I noticed Brett start to engage in subtle seizure-looking behavior a few times per day.  It took a few days for me to convince myself that I was seeing something of concern, but the quick eye roll-up was the giveaway that something is not right.  I took a video and shared with my husband my concern with what I was seeing.  My husband, having 20 years in the medical field, was not so sure that anything of concern was happening.  Like many, we have Google to thank for our trip to our local ER.  There, the doctors were correct in diagnosing Infantile Spasms, however, they knew nothing regarding the additional symptoms.  The plan was to make an appointment with a neurologist.  We scheduled an appointment with the neurologist for the next week. That night, I couldn’t sleep and knew that we needed to make the 2-hour drive to the ER at our local children’s hospital.

Friday, August 14, 2020, we were admitted to our local children’s hospital.  Brett was hooked up to a video EEG (VEEG) and the next day was scheduled for an MRI.  We give a lot of grace to the neurologist who gave us her thoughts and Brett’s prognosis before receiving the results of the MRI (we are all human and have experiences to learn from).  For several hours, we thought Brett likely had a genetic condition and was likely to never walk or talk, as well as possibly lose skills that he had already acquired.  By 5 pm on Saturday afternoon, the neurologist came running into our hospital room with the results of the MRI and was smiling with “good and bad news.”  We were informed of Brett’s large 2x2x1 cm Hypothalamic Hamartoma (HH), a condition that took me 2 weeks to learn how to say.  The neurologist explained that all of Brett’s symptoms are explained by the lesion, and she further informed us that some people have gelastic seizures, which are unusual types of laughing or giggling.  Without hesitation, Mark and I turned to meet eyes with a look of total surprise and without words, we knew that Brett had been having these types of seizures since a few weeks old.

We spent 6 nights inpatient with Brett that week to start him on a medication called ACTH to treat his Infantile Spasms.  Brett was having them once or twice a day and the VEEG did not pick up seizure activity until Sunday morning.  Brett’s spasms immediately stopped on the second day of treatment, however, Mark and I struggled to understand his gelastic seizures.  We knew that Brett engaged in odd and unusual laughing, however, it took weeks of informal research online to be able to grasp how to define the seizures in order to take data on their occurrence.  Brett’s unusual laughing occurred in and out of context.  We struggled with understanding if a laugh occurred in context, did it count as a seizure, and if it counted, how long was it occurring?

In the weeks and months following, Brett’s seizure activity was monitored by 2 separate 4-hour VEEGs, neither of which picked up any seizure activity.  This was good news and indicated that he was no longer having Infantile Spasms, however, we knew he was still having gelastic seizures.  After gathering information from the HH nonprofit website, I was able to gather that Brett was having approximately 20 gelastic Seizures per day, each lasting about 20 seconds.  The seizures were triggered by all emotions, eating, and car rides. After reading about the physiological effects of the gelastic seizure from the Hope for HH website, I knew when Brett was having a seizure when his eyes watered up and he looked scared and confused.

Brett’s case was presented to the epilepsy board at the children’s hospital in October 2020, and surgery took place on 3/2/21, 3 days shy of Brett turning 17 months.  The surgeon conducted laser ablation with one probe through Brett’s forehead and was able to ablate more than 50 percent of his 2 cm lesion.  Brett remained inpatient for 3 nights to monitor for diabetes insipidus.  Brett took a week of steroids to help prevent swelling and once that treatment was done, his personality began to shine with more frequent smiles and interaction than seen ever before.  Two weeks post-operation and Brett remains seizure-free! His current treatment plan consists of monthly injections of Lupron to suppress his testosterone level until he is ready to naturally enter puberty.  Brett’s testosterone level was found to be as much as a grown man’s level of the hormone. Brett is also receiving Early Intervention physical and speech services because he is 17 months and does not walk or talk.

Life continues to be a thing of beauty, in spite of the curve balls.  That’s what Brett has, and continues, to show us.  Mark and I often wanted to make sense of why we had to endure so much pain and wait so long to become parents.  Well, little did we know, that there was a perfect match being made by the heavens above. Brett needed us as much as we needed him. And while most people quickly think of how lucky Brett is to have found a mom in special education and a dad in the medical field, Mark and I constantly whisper to each other that we are the lucky ones!  All of our dreams came true the moment that we were entrusted to parent this little boy, with a little something extra special!

We would love to have all the control in life and have every answer to every question for our remaining lifetime. But in the end, having all the answers doesn’t really matter.  As long as we stop and remind ourselves that we are here on Earth doing what we are supposed to; loving, cherishing, celebrating, and cheering on our little boy Brett. That’s what parents do.