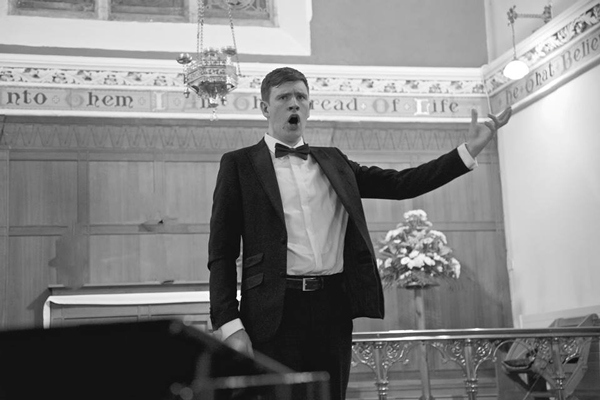 If you met David or indeed if you saw David perform you would be surprised to learn that David had a hypothalamic hamartoma (HH), had surgery in the Barrow in Phoenix at age 12 and had huge challenges along his journey to success.

David’s HH presented itself to us when he was 9 years old and like others he was diagnosed with ‘petit mal’ or absence seizures. We were told there was nothing to worry about, it was a common condition in young boys and medication was effective. Like other parents though, we started to evaluate all his mannerisms and behaviour and yes, there was that “little giggle”, the face becoming distorted etc which became very significant as we struggled our way towards a solution.

We felt comforted by the professional opinion that it was nothing serious and started medication. The next 3 years are somewhat of a blur. The medication and several medications did not work, and David’s condition started to decline very rapidly in terms of his cognition, frequency & severity of seizures (up to 50 a day), his emotional wellbeing and his ability to participate in everyday life. The tumour had taken its hold! To make a very long, arduous and emotional story short David’s HH was not diagnosed in Ireland. I started to research on the internet in a desperate attempt, to find a solution and to help my precious boy and came across the stories of CJ Soeby and others. This led me to the Barrow. We sent the scans (after many attempts to get the correct protocol used) to the Barrow and it was confirmed David had the tumour. David’s HH was removed by Dr Harold Rekate on the 15th March 2006. It was the 89th surgery for HH.  Lisa and John Soeby sat with us when our boy was in the operating theatre and have been with us ever since!

David’s surgery was considered successful and he returned to Ireland. David was 13 when he entered secondary school. It was a huge challenge on so many levels. His memory and cognition were very poor but with every month, every year he improved. He was always musically talented, and this was nurtured and developed at home and at school. All you need is one mentor, one teacher, one person who believes in you and David had that at school and college. That, along with David’s own self-belief, pure grit and determination, has helped him reach his goal. His first major challenge was getting a place on the college course. He passed the audition in advance but needed certain results in his leaving cert exam to get the coveted college place. He didn’t get it first time and fell short in his results. He could have given up but no, he took a year out to improve his results and apply again, and second time around was successful. This meant huge input and dedication. During this year he also developed his singing.  It was a dream come true for David to be on the degree programme with a whole class of very talented students and budding professional musicians, none of them aware of David’s struggle to get there!

David’s ability and in particular, his memory has improved every year since surgery. David found it very difficult to learn and retain information initially but now he has no problem as he has to learn music for new productions all the time. He learns music in several languages and is given a short space of time to do so.

Over the years we have encouraged David in exactly the same way as we encouraged our other 2 children. As a result, David graduated from the DIT Conservatory of Music in Dublin in 2017 with a higher honour’s degree in Music Performance. He was one of a small number graduating, as many do not reach the end of this challenging 4-year degree course that prepares students to be a professional classical musician.

David is a singer, a baritone. This October he will join the Northern Ireland Opera Studio as one of 4 aspiring young opera singers from the island of Ireland who have been chosen to participate in a programme that will help them on their career journey. This is following an open audition and interview.  David will benefit from individual coaching, masterclasses with leading international artists, as well as professional mentoring, career guidance, and language coaching.

David has won several prestigious competitions including the baritone solo competition at Feis Ceoil (a national all-Ireland classical musical festival) and the college Gold Medal for his recital. David performs professionally, throughout Ireland and is destined for a very successful career ahead.

David lives a very full life. This evening I told David I was writing this piece and I asked him why he thinks he has been successful. He simply said ‘nobody ever told me I couldn’t do it. ‘ ‘I don’t think too much about why I can’t do something, I focus on how I can’!

As a family, we have also been blessed along the way, particularly our engagement with the Barrow, Lisa and Maggie!