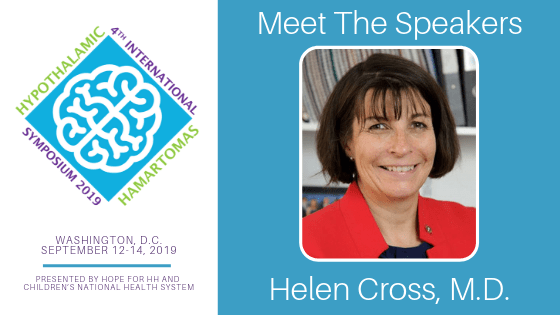 Hope for HH is co-sponsoring the 4th International Symposium on Hypothalamic Hamartomas – a professional symposium for HH investigators, clinicians and researchers – in Washington DC Sept. 12-14. The Symposium aims to identify gaps in understanding and opportunities for future HH research studies and collaborations to improve diagnosis, treatment and care of both the seizures as well as the other endocrinological and neuropsychological symptoms.

In this blog series, we will introduce you to several internationally recognized clinicians and researchers who are thought leaders both inside and outside of HH and who will serve as facilitators, presenters and discussants at the Symposium. Highlights of the Symposium will also be available to the HH patient and professional community following the meeting.

Her major research interest is improving outcomes in early-onset epilepsies. Her initial research was into the improvement of brain imaging in the presurgical evaluation of children with complex epilepsy, increasing the number of children who were to be considered for surgical treatment.

In establishing one of the largest epilepsy surgery programs in the world, she has worked on the utilization of advanced imaging techniques, but also in determining short- and long-term outcomes from early surgery demonstrating the benefits to those who remain seizure-free and who wean from medication.

Professor Cross has also contributed significantly to the evidence base of both newer and older medical treatments, leading the first randomized controlled trial of the ketogenic diet in childhood epilepsy. She has edited seven books, written 47 chapters, and has more than 250 peer-reviewed publications. She is elected Treasurer of the International League Against Epilepsy (2017-2021), Coordinator of the European Reference Network (ERN) EpiCARE (an ERN for rare and complex epilepsies), Clinical Advisor to the National Children’s Epilepsy Surgery Service for England, Chair of the British Paediatric Neurology Association Research Committee, and is a member of the Board of the International Child Neurology Association. She was awarded the ILAE/IBE Ambassador for Epilepsy in 2007, an OBE in the Queen’s Birthday Honours 2015 for her services to children with epilepsy, the AAN Sidney Carter award in 2017, and the ICNA Frank Ford Award for services to Child Neurology in 2018. Professor Cross received the Research Recognition Award, Clinical Science, from the American Epilepsy Society for her promising research during the society’s 2018 annual meeting in New Orleans.

Dr. Cross will be facilitating a session during the Symposium on
“Insights from Hypothalamic Syndromes and Epileptic Encephalopathies.” During this session, experts from areas outside of HH will share insights regarding how these other conditions and syndromes might inform HH research, treatment, management and care. The HH community is eager to learn from other conditions and this session will include talks on other hypothalamic tumor syndromes, Pallister-Hall syndrome, Prader-Willi, Tuberous Sclerosis and Dravet Syndrome.

I am a paediatric neurologist, with a specific interest in complex epilepsy.

I specifically became interested when looking after a series of patients early in my career. My contributions have essentially been clinical in evaluation of the natural history, comorbidities and more recently in developing a prevalence and incidence study in the UK. We have centralised epilepsy surgery for children in the United Kingdom, and have the first laser facility at our institution. I have had the honour of being chair of the Hope for HH Medical Advisory Board since 2015 and organised the 2016 International HH Research symposium in London.

In rare disease it is important to bring together expertise in one space to discuss progress and to roadmap ways forward – it is important for caregivers to be integral to that discussion as they bring forward the items that are important to address.

Spending time with my family.