SUDEP Awareness Series | What is SUDEP? 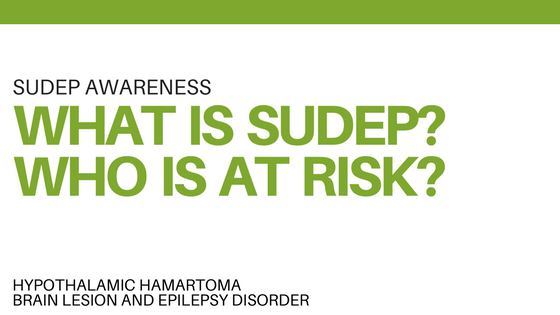 Hope for HH has been made aware of two young adults with HH that recently passed away. Both cases are suspected of being related to SUDEP (Sudden Unexpected Death in Epilepsy). For most HH families – SUDEP is an unfamiliar term that really should be a part of the conversation with neurologists – especially for individuals whose seizures are not well controlled.

There have been others lost to SUDEP in our HH community over the years, and with these two recent losses we have decided it’s important inform the community regarding SUDEP. We’ll be doing this through a multi-post SUDEP blog series.

The topic can be frightening and upsetting for some, so please be mindful of how this topic feels for you. Some individuals and caregivers want all the information that is available and other are not ready to process a topic like this. We believe knowledge is power and families can make educated decisions based on facts. While much is still not understood about SUDEP and why it happens to some individuals, we as a community can be a part of the on-going research to better understand how often it occurs in syndromes like ours.

SUDEP is the sudden, unexpected death of someone with epilepsy, who was otherwise healthy. In SUDEP cases, no other cause of death is found when an autopsy is done. Each year, about 1 in 1,000 adults and 1 in 4,500 children with epilepsy die from SUDEP. This is the leading cause of death in people with uncontrolled seizures. 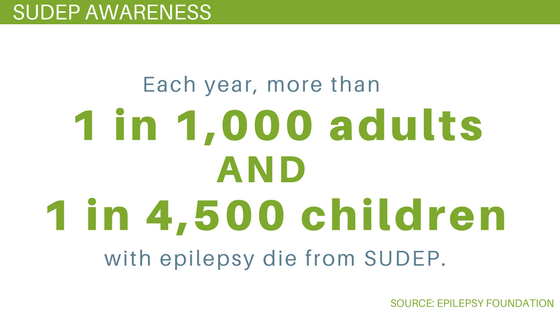 Sudden Unexpected Death in Epilepsy (SUDEP) is a terrible tragedy, often made worse by the unexplained nature of the loss. Although the exact cause of SUDEP is not known, researchers are making great strides to understand what may contribute to sudden death in people with epilepsy. It is most likely that SUDEP occurs for different reasons in different people. Often, but not always, there is evidence of a seizure, particularly a generalized tonic-clonic seizure (GTCS), occurring prior to death.

Studies examining the causes of SUDEP have focused on three main areas:

It seems likely that the changes we see in brain, heart and lung functions during seizures are contributing to SUDEP. The brain controls the functions of the heart and the lungs. The effects of a seizure on the brain can in turn affect heart and lung function. Abnormal heart rhythms are more likely to occur if breathing is abnormal and the lungs, like the rest of the body, rely on the heart for their blood supply. Abnormal heart function can reduce blood flow to the brain, while brain function can also be affected by low oxygen and high carbon dioxide in the blood.

Is it SUDEP if there was no evidence of a seizure?

Often there are signs that a person had a seizure before dying, but this isn’t always the case. While a seizure is not a requirement for SUDEP to be diagnosed, recent studies suggest most SUDEP are likely seizure-related.

Who is at risk for SUDEP?

The greatest risk factor for SUDEP is frequent seizures, especially generalized tonic-clonic (grand mal) seizures. Other risk factors being looked at include:

Some studies have shown that people taking a greater number of seizure medications may have a higher risk for SUDEP. 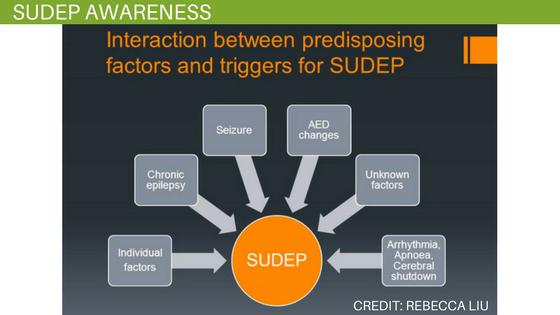 The risks in children are generally lower in children than in adults. However, the more severe the epilepsy, the higher the risk at any age. Children with rare epilepsy syndromes like HH may be at greater risk because of challenges with more seizure types that happen more often and are difficult to control.

Can I Prevent SUDEP?

The risk for SUDEP (Sudden Unexpected Death in Epilepsy) is higher in people with uncontrolled seizures. Thus, having as few seizures as possible, or ideally zero seizures, is the best way to lessen your risk and prevent SUDEP. Getting the “best care” you can for your seizures will help improve seizure control.

Keep in mind that there’s a lot about SUDEP we don’t understand. People with epilepsy can still die from SUDEP, even with the best care and the best seizure control.

Seizure detection devices are being developed to help individuals alert others if they are having a seizure – especially at night. There are no devices available that have been proven to prevent SUDEP. Yet, since SUDEP most often occurs during sleep, some people with seizures at night may be helped by having a way to let others know if a seizure occurs. Ideally, they could get help more quickly. This may be especially important for parents of young children.

Where can I get more information?

Hope for HH would like to Thank the Epilepsy Foundation for the information contained in this blog. They have a great deal more information on their website.

The Epilepsy Foundation has also created the SUDEP Institute to increase awareness and support research. If you have been touched by SUDEP or want to learn more about their mission you can go to The SUDEP Institute.

If you suspect your loved one may have passed due to SUDEP, or would you like to get involved with Hope for HH’s efforts to raise awareness of SUDEP within our community, please contact us at info@hopeforhh.org.

Tomorrow we’ll continue this blog series with ‘Part 2 – Talking about SUDEP with your doctors’.