Informal Advice from a Mother on a Rare Disease Journey 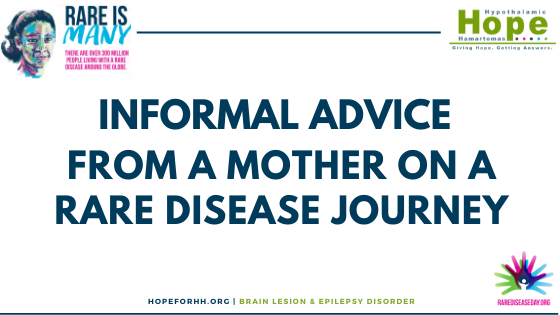 A year and a half into our rare disease journey, and I could go toe-to-toe with some of the most intelligent medical experts in the field.  In fact, I have. I needed to. If I didn’t, Brett wouldn’t be where he is today.

The day that Brett received his ultra-rare diagnosis of Hypothalamic Hamartoma, it began.  An obsession began with gathering every piece of information that I could get my hands on to understand the condition.  It started with the Hope for HH website Hypothalamic Hamartomas | Hope for HH, joining private online groups and scouring research papers on PubMed (nih.gov).  Today it continues with joining the Hope for HH nonprofit board members to give back and help to promote research and support families, new and old.

I’m relatively new on this lifelong journey with my son, however, my experiences so far are likely to help others. My experiences are also some of the same situations experienced and talked about by many others in the HH community.  So, I’m paying it forward with this blog and offering some of the community’s informal, and what could be considered lifesaving, advice.

First, gather all of the information that you can on the condition.  Join online private groups and hang around to read what other individuals are saying, even if you don’t want to post or contribute.  Anecdotal information is valuable to help formulate a basic understanding of technical information in layman’s terms and without the anxiety of having to cram all of your questions in a time-limited doctor visit. You will find that many doctors won’t have answers to your questions anyway, unfortunately.  There just isn’t enough time for doctors to study every rare disease that exists.  If they are good doctors, they will admit, “I don’t know” and hopefully refer you to someone or somewhere that does. But that’s typically not the case.  Rather, the medical professionals tend to be excited about getting to treat the rare disease and potentially can cause further harm.

For me, in the beginning, the search through informal and anecdotal information from other families is what shaped my understanding of a gelastic seizure when neurologists from a leading level 4 epilepsy hospital in the United States couldn’t define it or even identify it in my own home videos. I was told that my videos were demonstrating what they thought was, “normal development.” I watched other families’ videos of all of the different ways that a gelastic seizure manifests and how they can change over time. Brett’s seizure types matched perfectly to what other families were posting. Also, I learned that gelastic seizures don’t typically respond to medication or show up on EEGs.  I was prepared to face neurologists and neurosurgeons in my area that were not considered experts on HH.  I knew to be prepared when Brett’s seizures did not register on an overnight video EEG. I had with me multiple videos, a diary of the frequency and duration of the seizures, and research articles explaining that the seizures were coming from too deep in the brain to register on the EEG.  I was prepared to combat highly inaccurate information about seizures coming from the HH.  For example, two different neurosurgeons claimed that Brett’s absence seizures had nothing to do with the HH and were coming from something else.  The neurosurgeons incorrectly claimed that HHs only are responsible for gelastic seizures.  I didn’t learn any information about gelastic seizures from doctors or specialists.  I learned it from amazing families in my HH rare disease community.

After Brett’s first laser ablation surgery, I wrote a blog to help future families identify HH symptoms in infants.  I was still new on the journey and learning things for myself, however, Brett’s tumor was found early due to both epilepsy and central precocious puberty. I was certain the information could help another family with an infant.  As a result of putting Brett’s story online, an anonymous family reached out to me to inform me of a neurosurgeon that was local and specialized in fully removing HHs with an old-school open skull procedure called the transcallosal interforniceal approach. Most individuals in the community weren’t aware that this method of fully removing the tumor via an open skull procedure was still available in the United States, as MRI-guided laser ablation surgery took the forefront of surgery in 2010 with Dr. Curry at Texas Children’s Hospital. However, this online connection with an anonymous family brought back to life another surgical option for this rare disease that began with Dr. Rosenfeld from Australia in 1997 and continued into the United States with Dr. Rekate through the 2000s.

At this point, Brett’s seizures returned, so he was in need of another surgery.  However, Brett’s tumor was considered large (2.1 cm) resting at the base of the hypothalamus and engulfing the mamillary bodies while pressing on the pituitary stalk. Another laser ablation would have been extremely risky. One of the rarest specialized neurosurgeons in the United States today, Dr. Langer, was handed the reins of Dr. Rosenfeld and Dr. Rekate’s legendary work. In preparation for a more invasive open skull surgery (via an orbitozygomatic procedure) to remove Brett’s tumor, I began to investigate the future prognosis of Brett’s central precocious puberty.  Two endocrinologists did not believe that removing the tumor would cure Brett’s precocious puberty.  However, my own research discovered that removing the tumor did in fact cure many cases of central precocious puberty.  Therefore, I took it into my own hands and informed Brett’s endocrinologist that we would not be giving Brett Lupron shots after his second brain surgery to remove the tumor.  Brett is now free of puberty, as well as both seizure types (gelastic and absence seizures). 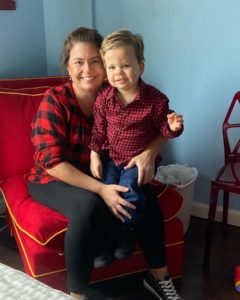 Over a year’s time, Brett’s case had resulted in meeting many different specialists, resulting in many differing opinions.  You know that saying, “Information is power?” Well, that is 100% true with a rare disease.  It is completely overwhelming to meet a number of different professionals and seek out varying opinions from different families.  However, the more information that was gathered, the more clear of a direction I had for how I wanted to treat my son’s rare diseases.  Some of those decisions came directly from the treating medical specialist, and some came indirectly from my own research or another family’s experience in having to deal with the same rare diseases.  I know that if I would have followed straight forward with every initial recommendation from medical professionals that are not experts in HH, Brett would not be where he is today.  Brett left his second open skull procedure without his tumor, without any other surgical injury, without precocious puberty, and is now four months seizure-free.

Read more about Kristy and Brett: